Lyall Mews West is a cobbled cul-de-sac, approached through its own arch on Lyall Street in Westminster, opposite Lyall Mews, another original/ surviving Mews. There are 6 properties in the Mews, used for residential purposes. 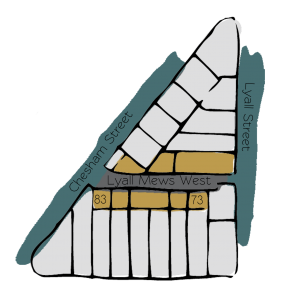 Between October 1940 and June 1941, a high explosive bomb is recorded falling directly onto Lyall Mews West, meaning the buildings had to be rebuilt and therefore belie any equestrian usage in the past. The area was noted as being fairly comfortable with good, ordinary household earnings when the London Poverty Maps were first published.

The Mews has two storey, painted and rendered brickwork buildings with roofs hidden behind parapet walls. The buildings are surrounded by a cobbled road surface and parking is restricted. There are both intact and converted garages present in the Mews.

The original purpose of the Mews was to provide stable/ coach house accommodation to the main houses in the surrounding area. Nowadays, the function of the properties is mainly residential.

A few planning applications have been made since 2003 for alterations to properties, namely; roof extensions and changes to the fenestration. Conservation Area controls now apply to new development in the Mews. 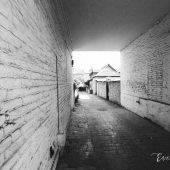