Mews buildings are simple structures and many have been adapted significantly over the years as their use changed.

Most Mews will have started life as a two storey structure with stables or a coach house on the ground floor and living accommodation on the upper floor. Today they can be up to five storeys high, with possibly two below ground and three above ground as well as a roof terrace.

Over the years three phases of development have typically occurred to Mews Buildings:

–       FIRST PHASE – Separation of Mews from the main building

–       SECOND PHASE – Internal and external remodelling of the Mews

–       THIRD PHASE – Extensions, either to the roof or the basement or both.

Not all stages will have occurred to every mews and not all development will occur in such defined phases, however, these works are typical of many such buildings. 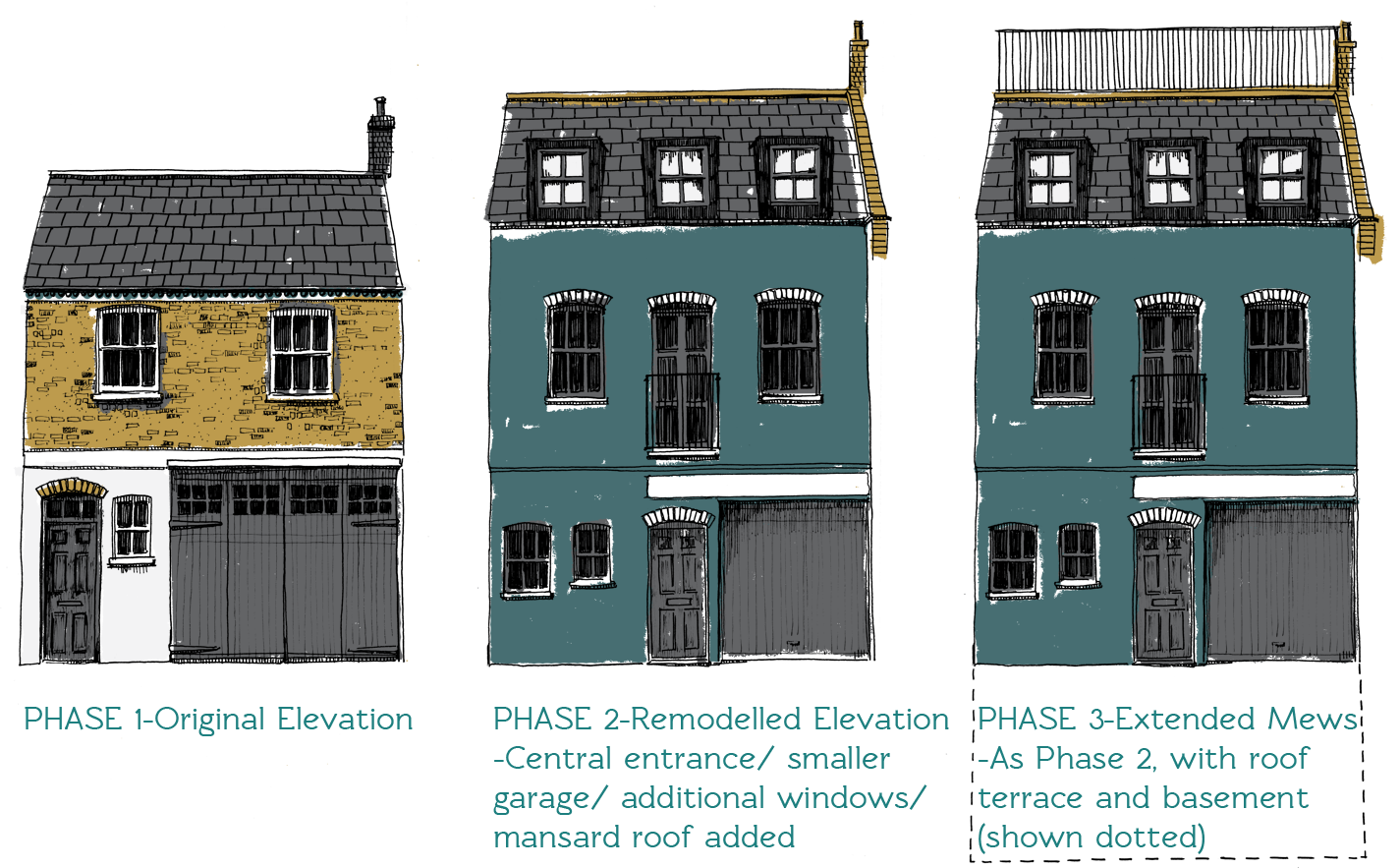 PHASE ONE –  Separation of Mews from the main building

The early Mews were originally constructed as ancillary accommodation for the main properties they adjoin. The majority of them were then, at some point, severed from the much larger main property and became separate properties. Mews that were built from around 1850, or later, were often built as separate independent buildings with access being provided through their own gates and arches. 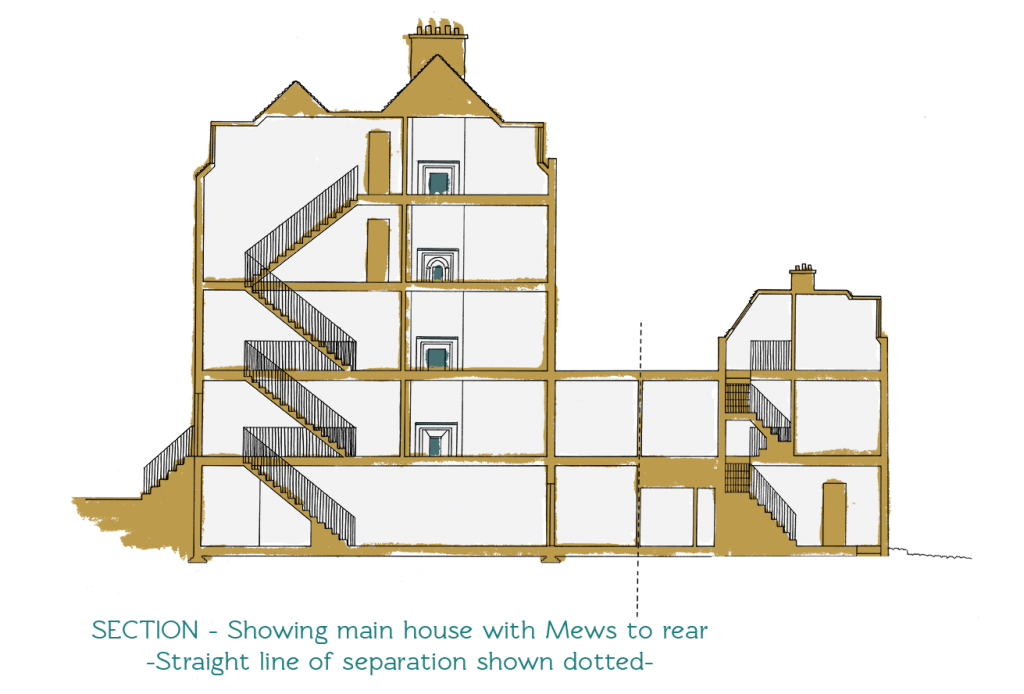 The severance from the main buildings primarily occurred in the late 1910’s and 20’s possibly in conjunction with a lease renewal. It was long after the horses had left, generally after the First World War, and at a time when economic prosperity and a shortage of housing combined to make the Mews seem attractive venues for residential usage.

Although simple in concept, actual separation was difficult as it necessitated re-routing the electrical, water and gas services and drains; separating walls had also to be constructed and overlooking windows and interconnecting doors blocked up. 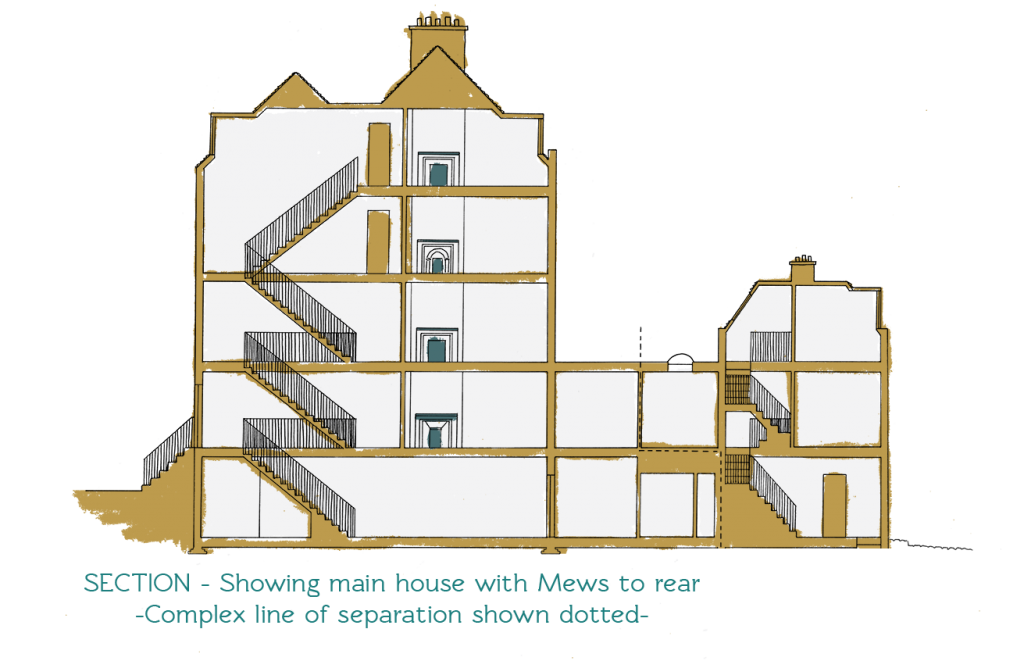 The separation works best where there is a single straight wall between the Mews and the main house. It is less successful if there are overlaps of floors or uneven splits since these can create flying freeholds and other conveyancing and practical problems. 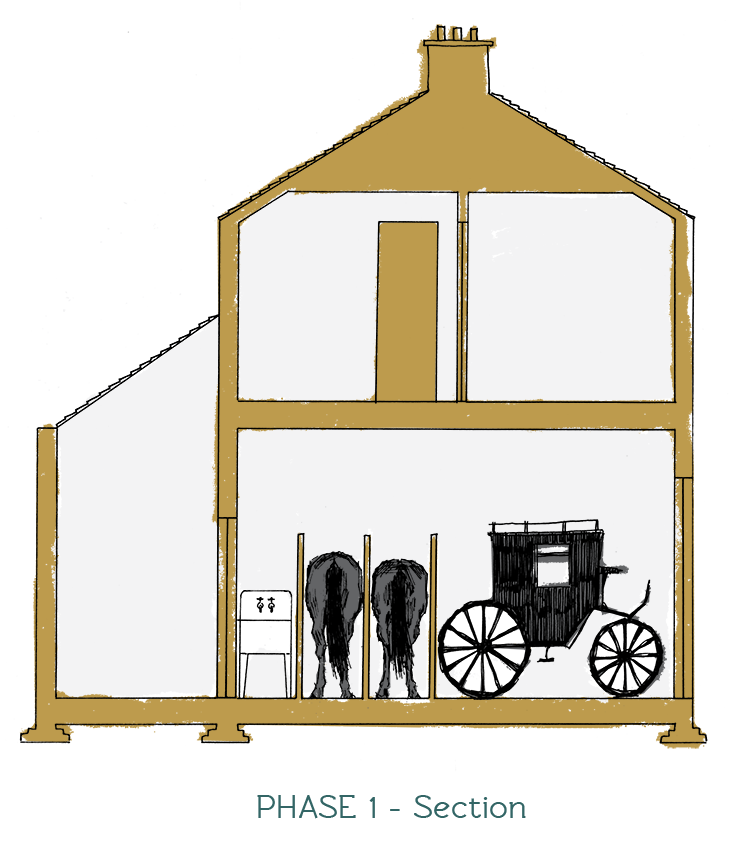 PHASE TWO – Internal and external remodelling of the Mews

As Mews were designed for horses rather than for human habitation the internal floor heights need altering when humans take occupation. This will typically involve lowering the ground floor height so that additional space can be created in the upper storeys whilst still leaving sufficient height at ground floor level for the storage of a car (though this is now no longer sufficient for many modern cars). Ironically any reduction in ground floor height can reduce future development potential as some planning authorities are now limiting basement height to the height of the ground floor. 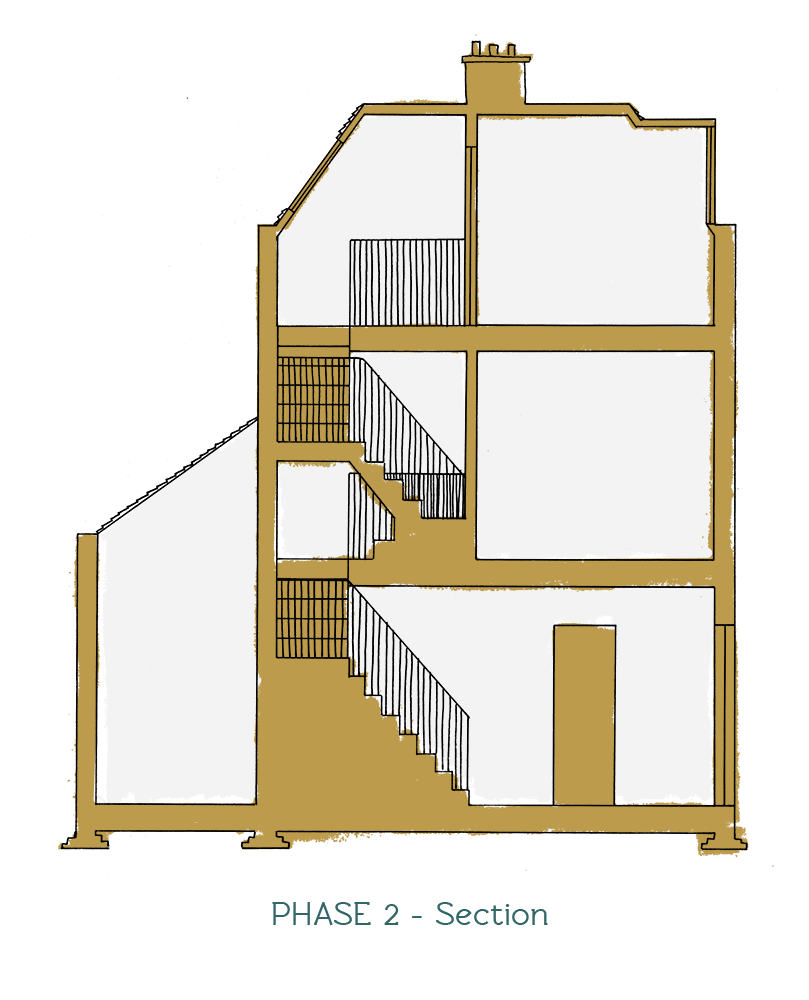 Horses and coaches were bigger than cars so the stable space will also need to be reconfigured to reduce its width and length and allow the creation of a ground floor room. The stairs would then need to be repositioned and the external elevations altered to provide a new alignment of the window and door apertures. If an additional storey is added, the front elevation will also need to be re-built to include a parapet or alternative eaves arrangement that allows the roof to be re-configured to contain habitable rooms and, possibly, a small balcony.

If this had taken place in the 1960’s or 1970’s it is likely that the Mews would not have had conservation area status so the then owners would have had more scope to adapt the elevations than is possible in the current conservation controlled era.. It would have also allowed greater scope for the individual painting of the Mews elevations that often occurred at this time. Currently conservation area status requires special consideration in terms of building design and heritage

The lack of conservation control in the past explains why so few characteristic Mews features, such as hay lofts, stable doors and winch beams, now remain. These notable architectural features are now heavily protected and much importance is given to careful attention to detail and to the use of appropriate materials such as the correct size of glazing bars, the depth of window reveals and the title windowsills.

Brickwork is not encouraged to be painted or covered with cladding material as this damages the original architectural character of the Mews and requires continuing maintenance. 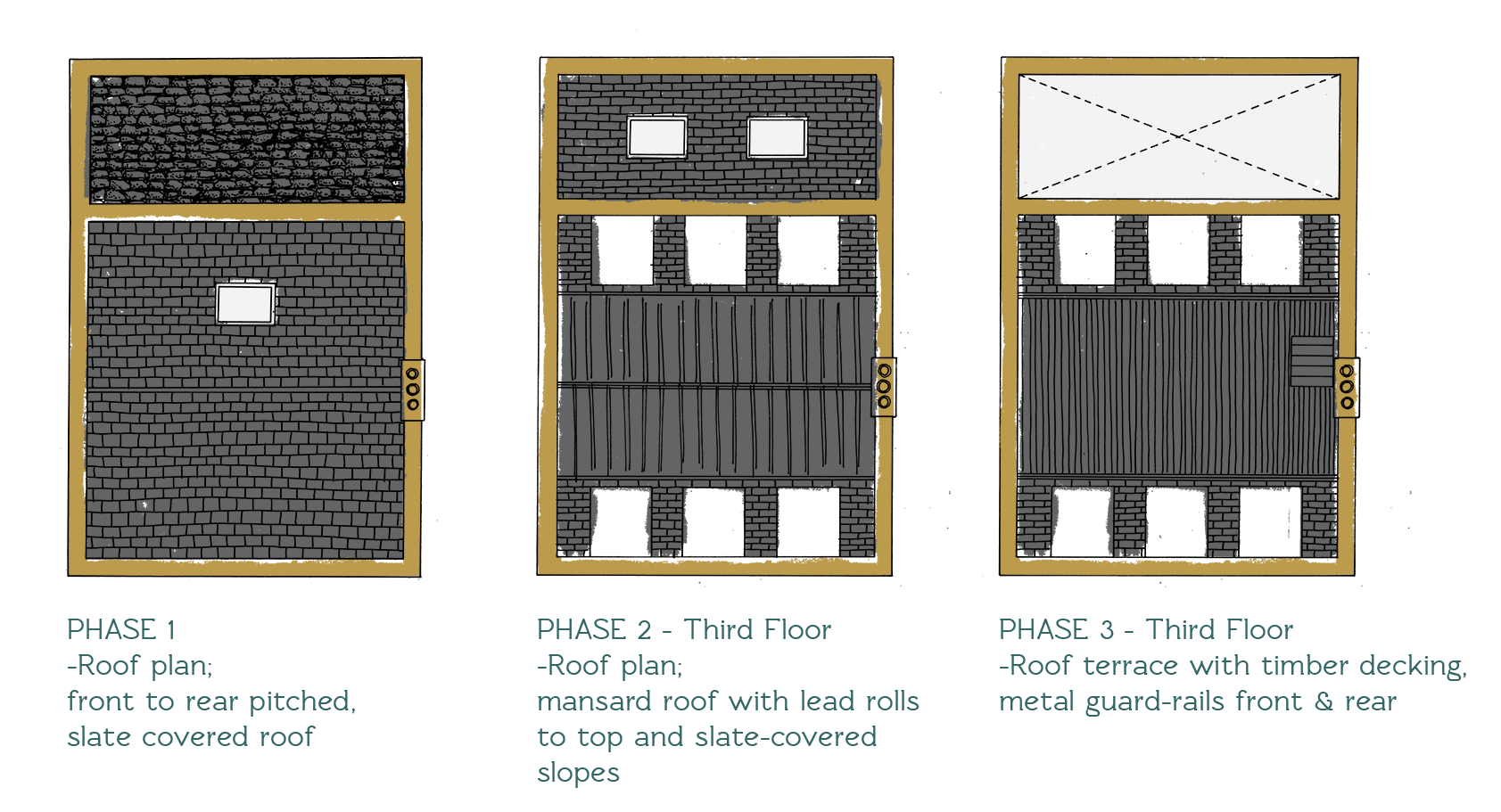 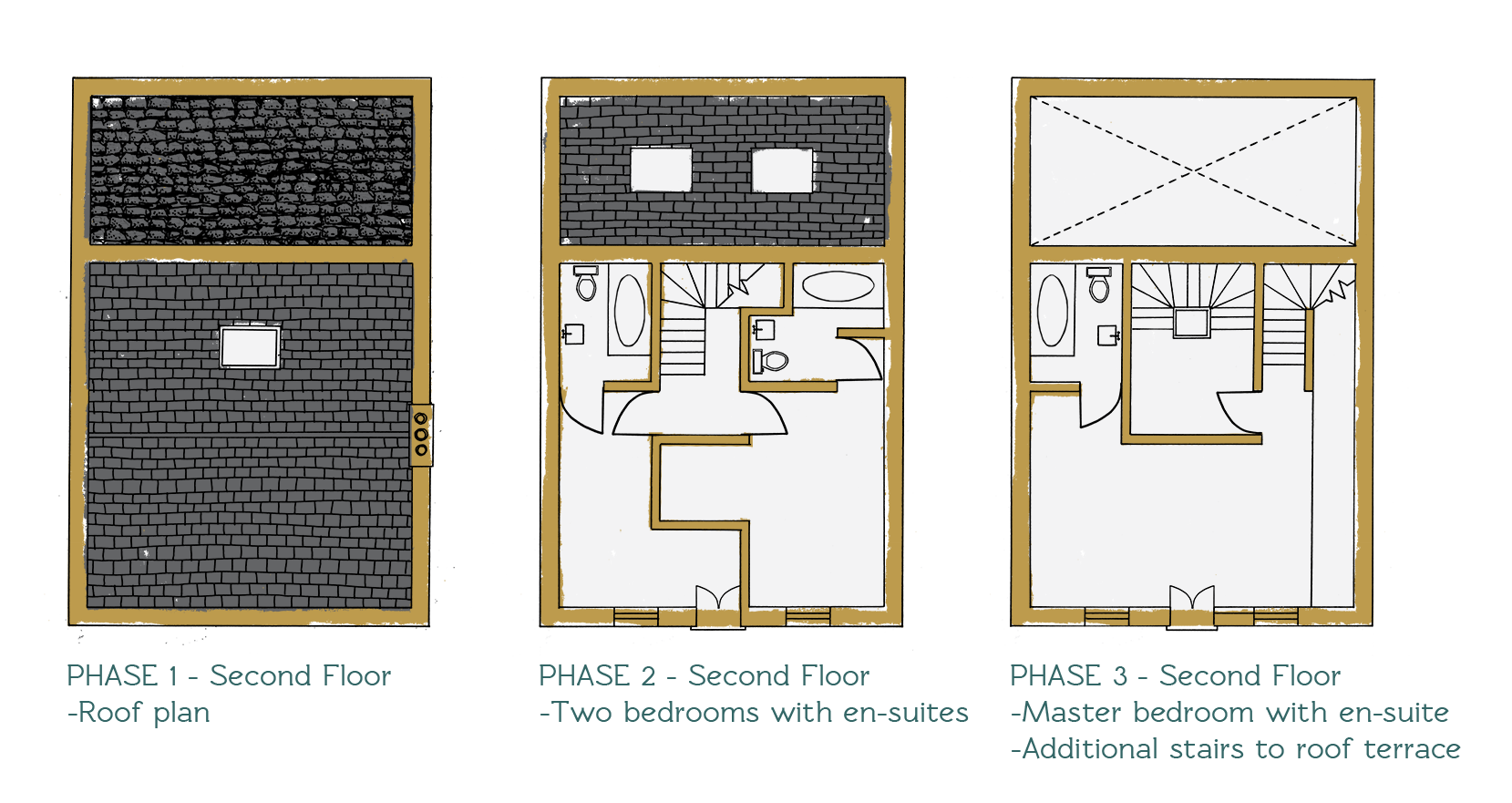 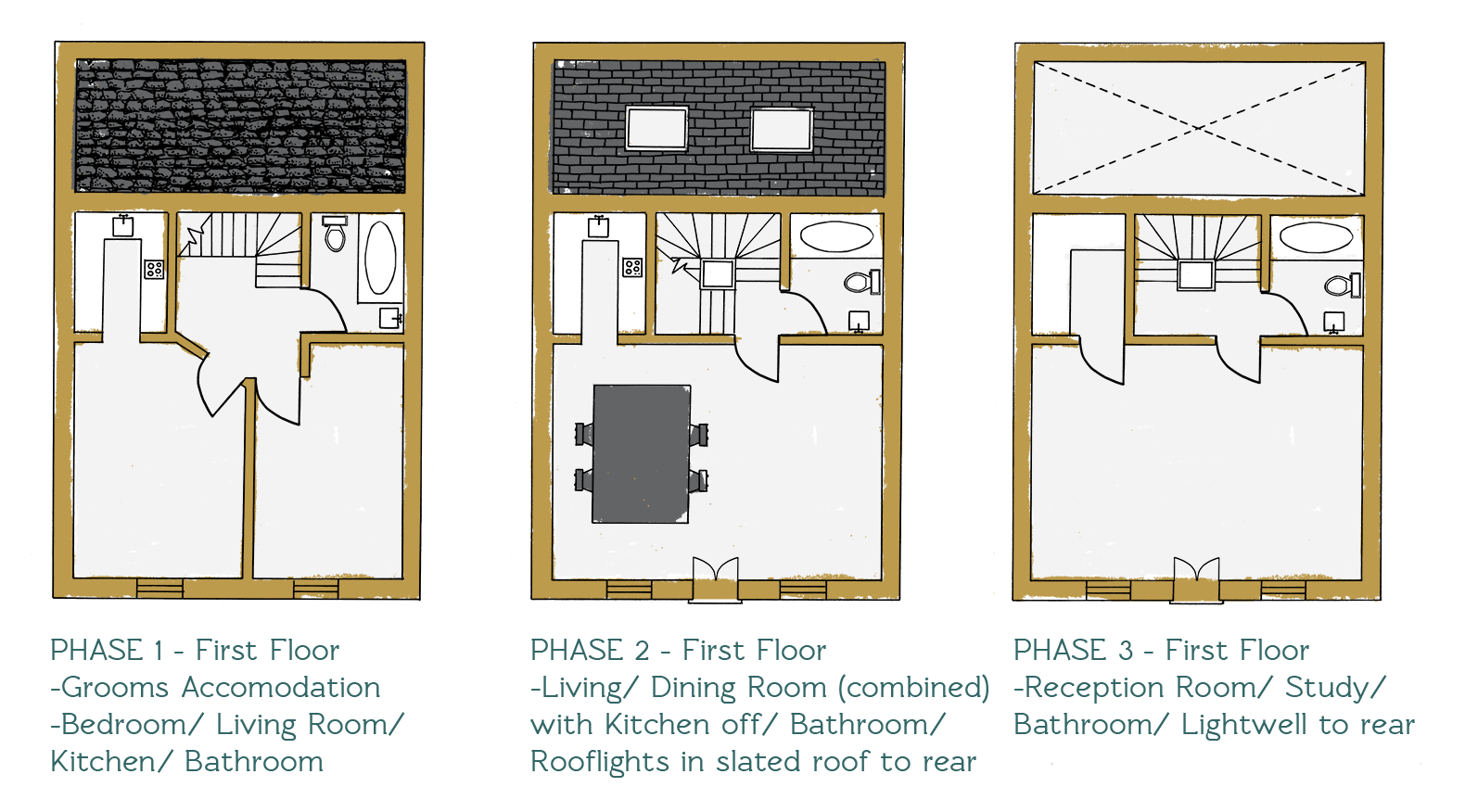 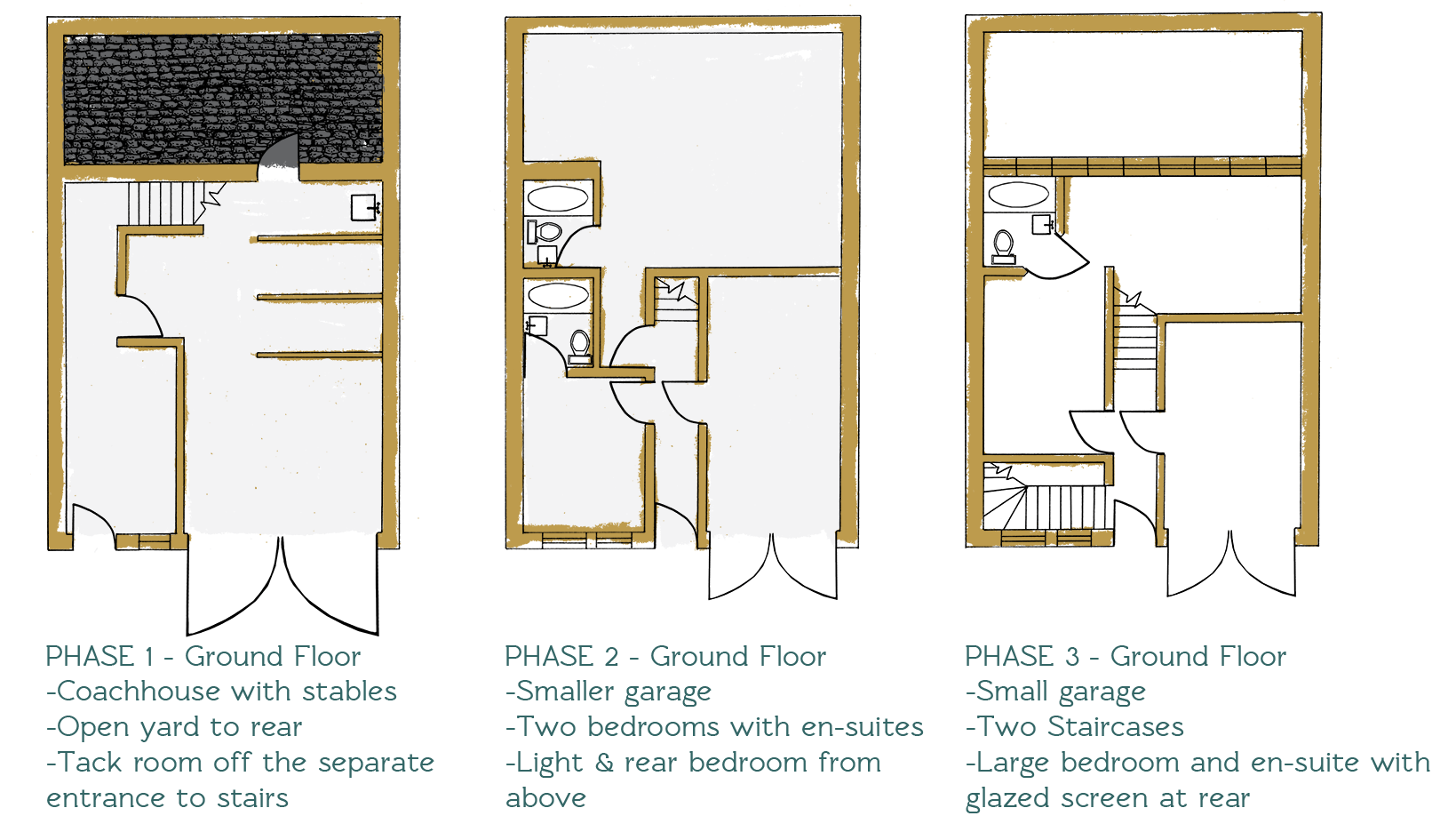 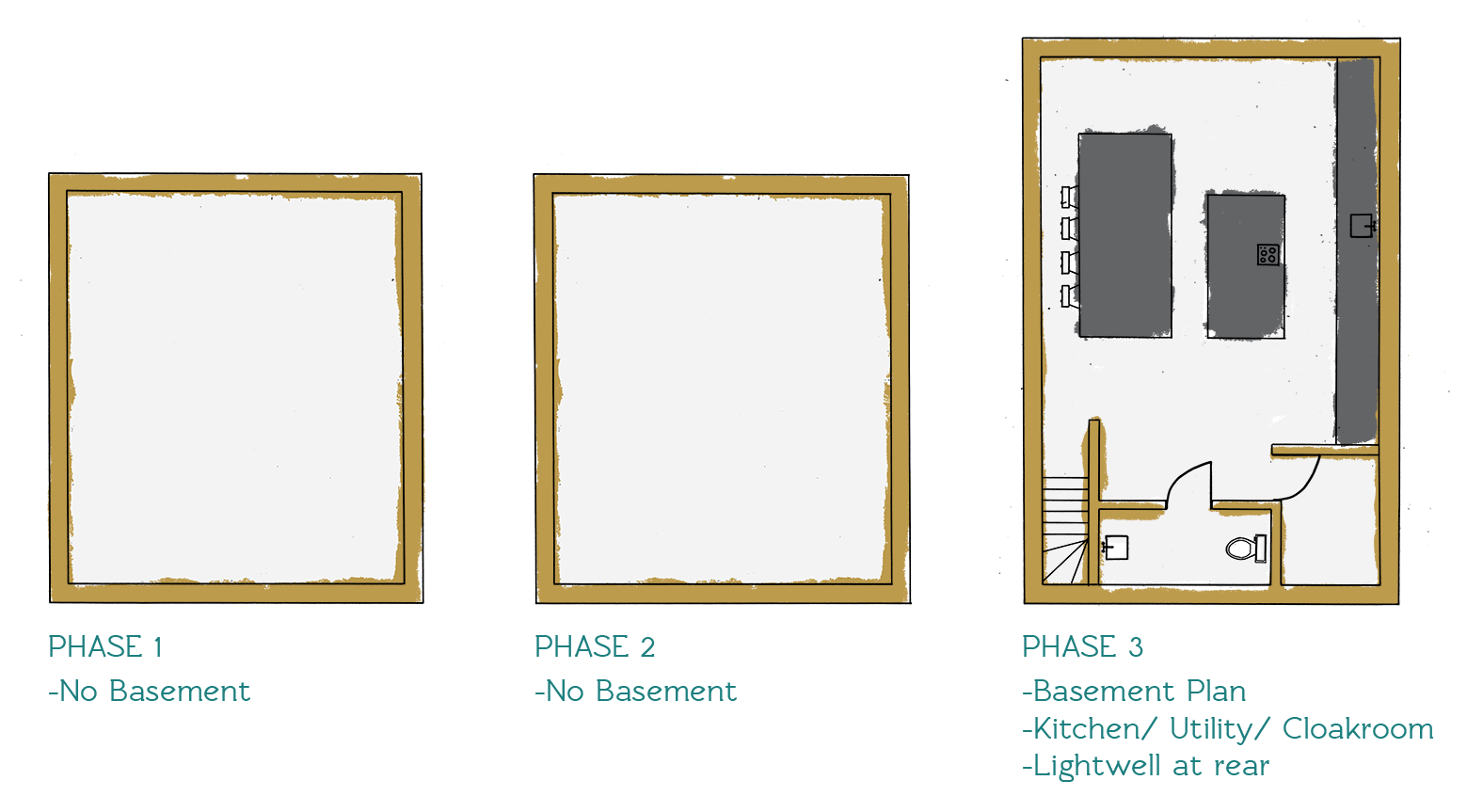 PHASE THREE – Extensions, either to the roof or the basement or both

Extensions occur as lifestyles change and people demand more of their properties. To afford a contemporary lifestyle, Mews have become bigger, more complex and, almost inevitably, more luxurious. Such changes have also been driven by the profit motive.

People no longer want a garage that is too narrow for modern cars, or to enter a property directly into a living room, or to have no ground floor cloakroom or coat cupboard. They do not want to have a living room that is too small and not properly proportioned, or to have bedrooms that lack en-suite accommodation. They don’t want a kitchen that is remote from the dining area, or to suffer inadequate natural light and ventilation.

To achieve these lifestyle improvements to a Mews additional space is needed which involves either extending upwards or downwards, or both. Such alterations are often significant and in some cases in the past have involved a complete rebuilding (possibly due to the legacy of World War II bomb damage). As with phase two developments the external appearance now needs to accord with the local conservation area controls. Most London Boroughs encourage conversions which retain the original roof form, subject to local considerations in individual cases

Basements are an even more contentious area and are heavily controlled both in terms of their design and their construction. Although not a recent phenomenon, there has been a considerable increase in the number of basement developments recently. Initially this manifested itself in the desire to build as deep as possible and to construct as many storeys under a building as possible. The trend then changed when London Boroughs and the Great Estates became resistant to deep excavations. A phase of deeper single storey excavations then began and floor to ceiling heights of more than 3 metres were achieved.

It is now less likely that such deep excavations are permitted and the trend is for basement floor heights to be restricted to the ground floor to ceiling height.

We will consider these and other development issues in the BLOGS section of this website, which will follow. However if you have any specific projects needing surveying or party wall advice please contact our sister company. 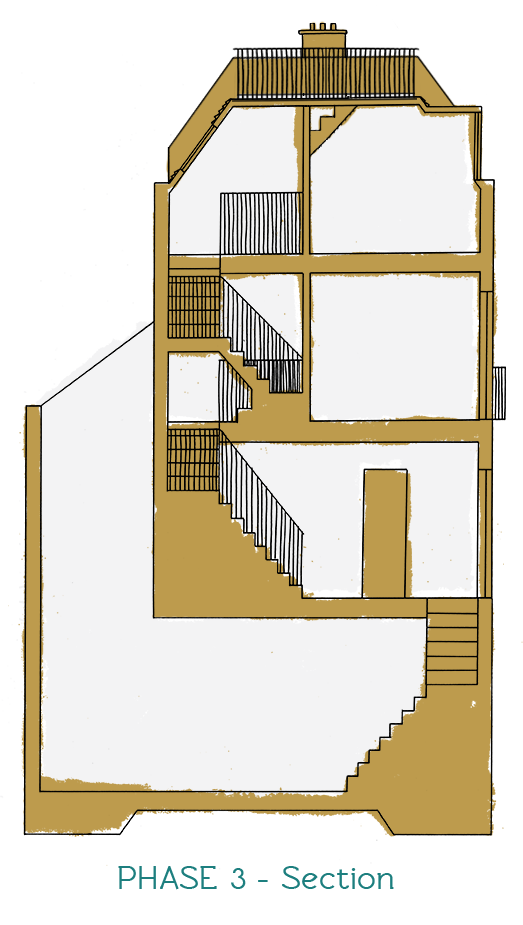 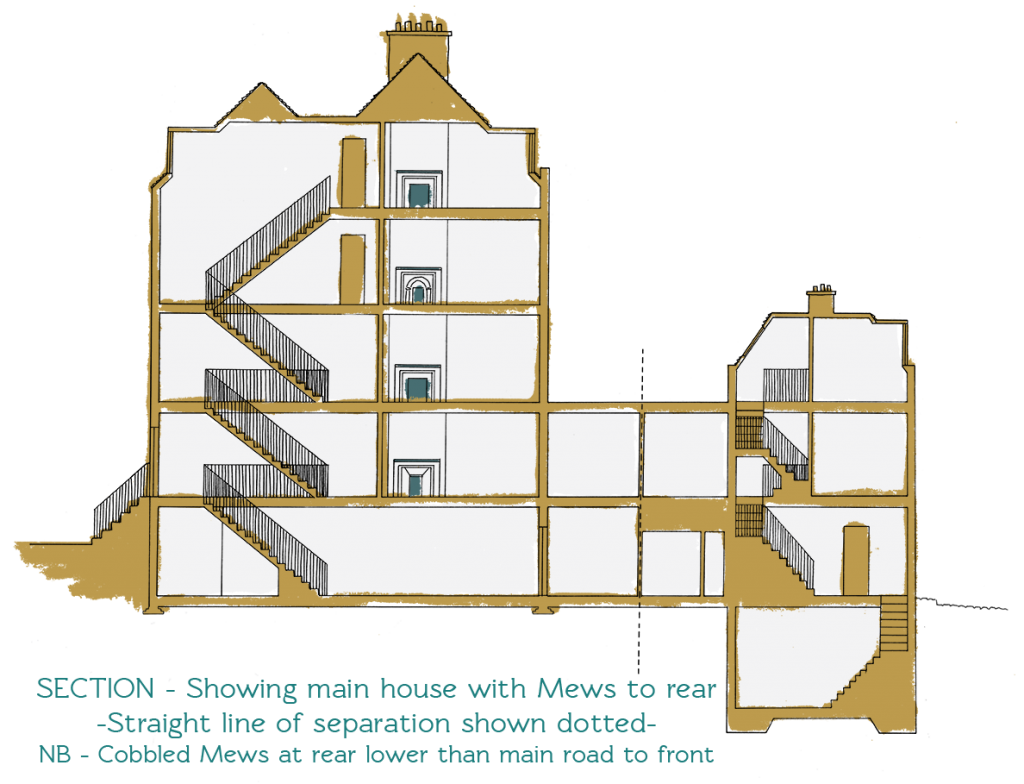