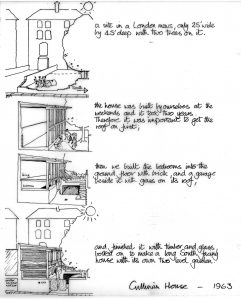 Construction of two storey mews property on empty site at 62 Camden Mews, NW1 9BX in the London Borough of Camden. This is a part closed and part open plan house.

The closed plan sections are solid having a brickwork surround to reflect their use. The open plan sections are more lightweight, being constructed in softwood (deal) with cedar cladding to give the feel of a ‘greenhouse’ structure.

In 1960 Ted Cullinan – the founder and chairman of Cullinan Studio who are a large Architectural co-operative based in Islington – purchased a site for the construction of his own Mews house. The site in North West London was semi-derelict. It had been used for light industrial purposes of a number of years. There were just two trees and an Anderson shelter.

Originally the site cost £2000 and the construction cost was £4000. Timbers were salvaged from an army camp he was then working on.

The value is now estimated at £1.5 million.

The house uses solar principles whereby lights defuses down using the angle of the sun’s rays to enter the structure. The design provides most of the light at the top and lesser light through restricted windows to the lower floor. The top floor is used for the living rooms and the lower floor for the bedrooms.

The concrete and timber construction is designed to reflect the lightness of Open Plan to the top floor. The brickwork expresses the function and solidity of the closed lower floor layout.

At the time of construction Ted was dealing with 1950’s CLASP schools which were Cubist in style and have no overhangs. Ted learned the value of the overhangs and incorporated these into his building.

The other houses he built at the time (1960’s) were in California and in Hampshire. These were built along similar principles which all aimed to achieve most gain from the sun.

Having purchased the site two years earlier, works started in 1962 allowing occupation by Ted and his family in 1964. The house was still a work in progress at that time and even today further works – such as the installation of triple glazing – are being carried out.

The property was completely redeveloped and this was allowed because there were no other buildings there. It is now a conservation area.

Ted did most of the work himself with the help of friends; initially he did not do the electrics or plumbing. He became adept at plumbing but left all the electrical works to others. Now past the official retirement age and whilst still active as an Architect he is no longer active in construction.

Camden Mews runs behind the very grand buildings of Camden Square and it is near council flats which gives it a good social mix. Ted considers that properties should follow the scale and structure of the social mix, and all properties should remain open to one another to avoid the wealthy cutting themselves off.

Ted’s philosophy is to try and get the best building on a site, but not necessarily get the best value. He aims for overall efficiency and to establish a good plan inside and outside for living. Mews are small scale world within a large-scale world and should be treated accordingly.

Ted’s view is that any progressive architecture eventually becomes adopted by others. Whilst it may be resisted initially, ironically the same powers subsequently apply red tape to preserve it.

Ted would like to see a green future for the Mews, within an urban context, with application of his principles of solar gain. Ideally he would like Mews properties to be partially self-sufficient and would encourage Mews owners to grow vegetables on the roof or other parts of the property, and use soil or other natural materials to insulate their Mews.

Drawings, photos and other details 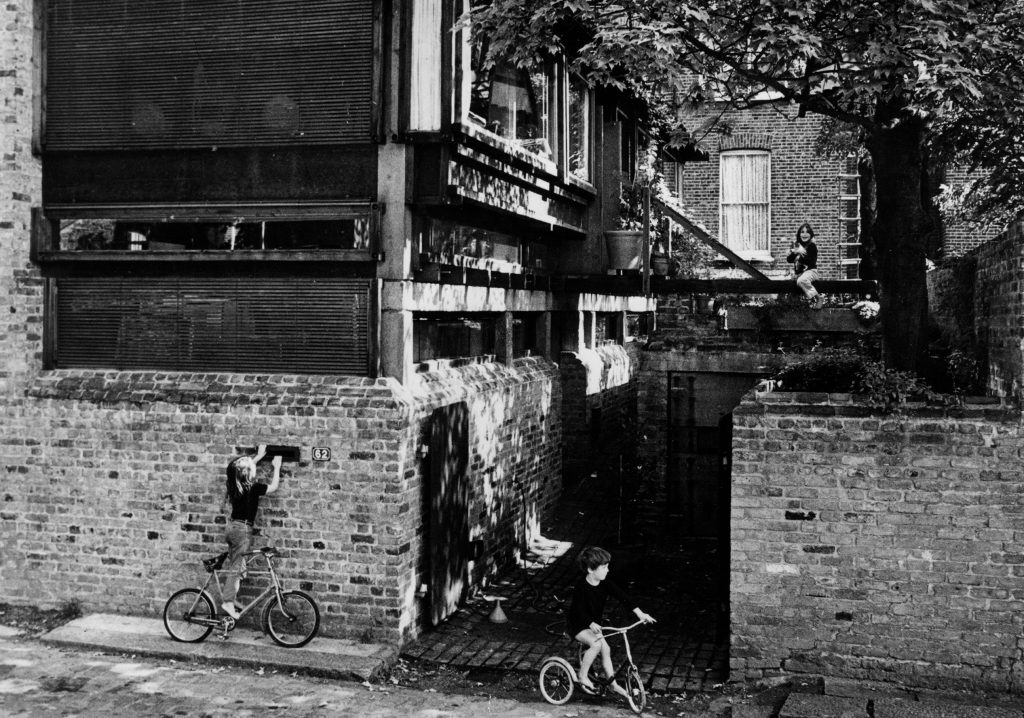 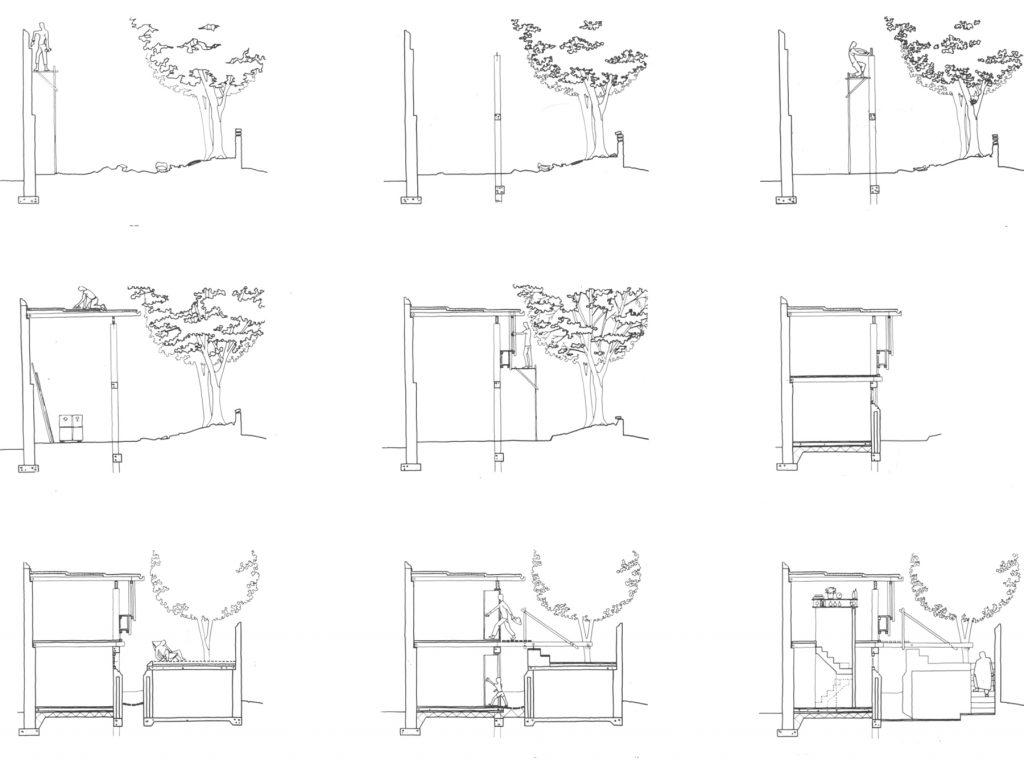 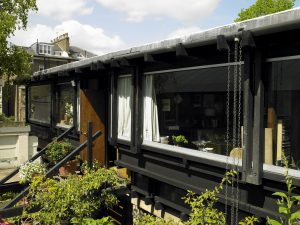 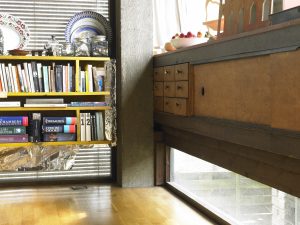 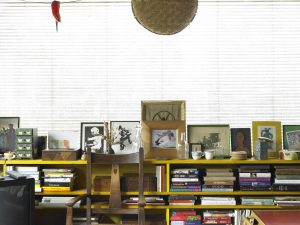 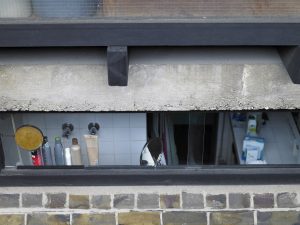 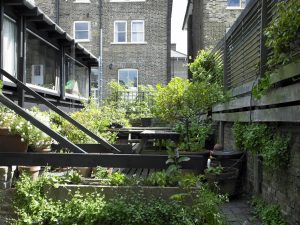 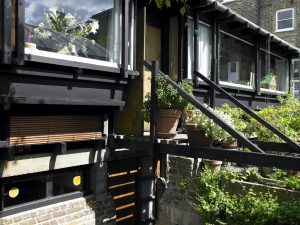 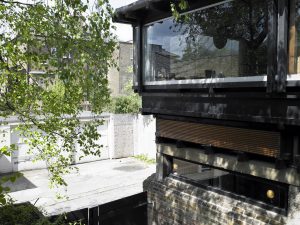 Ted is not involved in any basement projects, and surprisingly has not been involved in other Mews houses until recently.

He is now building 4 Mews at 87 and 89 Camden Mews, opposite his Mews. This project uses a 50 foot wide site which will be divided in half to create 2 Mews per 25 foot wide site. As previously he will apply solar principles, which means he can then build them in south-west direction and therefore optimise the benefits of the sun on the site.