Davies Mews is a through road between Davies Street and South Molton Lane in Westminster. The Mews contains only 3 properties and is oriented in an east-west direction, close to St. Anselm’s Place, another original/surviving Mews accessed from Davies Street. 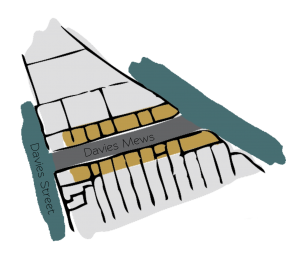 In 1940, a high explosive bomb is recorded falling somewhere on South Molton Lane, just above the Mews. When the London Poverty Maps were published, the area was noted as having comfortable living conditions with average household salaries although some areas were noted as being poorer.

The stables in Davies Mews were developed by R. Blomfield in 1902-3 and consist of solid stone-dressed red brick. The three storey buildings have a mixture of mansard and parapet roofs surrounded by a tarmacadam road surface and partial raised pavements. Numbers 1-7 in the Mews are registered Listed Buildings.

The south side of the Mews was originally occupied by the individual coach-houses and stables of the houses on the north side of Brook Street, and on the north side there were livery stables. The stables were rebuilt between 1839-40 and then they were demolished in 1902. A day school was opened in a temporary premises in 1846. The south side of the mews is now taken up with the back buildings of the houses in Brook Street, all dating from the late 19th and 20th centuries. 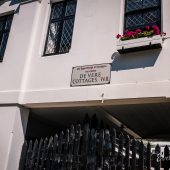