Situated within Inner London in the Borough of Camden, is Daleham Mews; a cobbled through road off Belsize Lane, behind Baynes Mews and McCrone Mews, also containing original/ surviving Mews properties. The Mews contains 47 properties used for residential and commercial purposes. 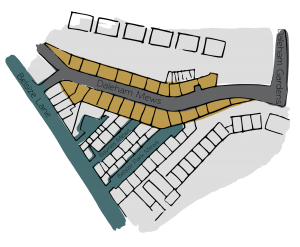 The Mews is part of the Belsize Park Conservation Area. Designated in 1973 and then extended in 1984 to included part of Belsize Grove, the area is large scale, containing semi-detached Victorian Villas along with Belsize Village bringing charm to the otherwise uniform appearance of the buildings within the area. The most recent extension to the Conservation Area has included the incorporation of the open space at the southern side of Elizabeth Mews and the shopping parades on Haverstock Hill. Elizabeth Mews was included into the area in 1991.

The large villas built around 1850 had attic and basement space for servants and were aimed at wealthy professionals, the intention being to attract the ‘carriage classes’ to the north of London rather than areas such as Bayswater and Kensington. Unlike other areas built at the same time or slightly earlier there was no apparent demand for extensive stabling associated with each street. The main area of Mews development within the area was constructed on a triangular four-acre field to the north of Belsize Lane.

A high explosive bomb fell onto Belsize Lane, right next to the Mews, presumably causing significant damage to the properties in World War II and when the London Poverty Maps were first published, the area was deemed to have a mixture of comfortable and poorer living conditions.

The two and three storey properties have rendered and painted brickwork facades with gable roof styles, surrounded by a cobbled road surface and partial flush pavements.

The original purpose of the Mews was to provide stable/ coach house accommodation for the main houses on the surrounding streets and nowadays they are predominantly used for residential purposes, with some commercial activity also taking place. The road contains many original features and has slightly projecting square bays dominating the north side of the street. The winding Mews is fairly long and goes uphill, changing alignment as it does so. 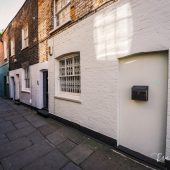