Cross Keys Close is a small cul-de-sac off Marylebone Lane in Westminster. Containing 10 properties used for a mixture of residential and commercial purposes, the Mews is similar in size and location to Bulstrode Place, a redeveloped Mews next to Cross Keys Close.

Between 1940 and 1941, a high explosive bomb is recorded falling onto Welbeck Street, close to where the Mews is situated. The area was regarded as having a mixture of different living conditions when the London Poverty Maps were originally published. Some houses were seen as middle class, whilst others were fairly poor in comparison.

Cross Keys Close is situated to the west of the Harley Street Conservation Area in Westminster. First designated in 1968, the area is now dominated by terraced houses of different periods and different levels of social status. It retains a substantial medical presence, whilst offices predominate to the eastern edges.

Not strictly a Mews but sharing similar characteristics in terms of building scale and design, this close has two and three storey buildings with timber coach doors and glazed brick to ground floor contrast with large Edwardian industrial buildings. The smaller buildings are made from stock brick with timber windows. There are a mixture of mansard, pitched and flat roof styles.

There have been many planning applications made before and since 2003, mainly small alterations to the exterior of the properties and changes to the fenestration. Conservation Area controls now apply to any new development in the Mews. 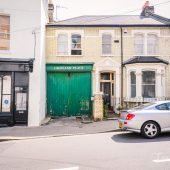