Bott’s Mews is a cobbled and paved cul-de-sac (with a pedestrian through road) that is approached through its own arch off Chepstow Road. The Mews is oriented in a west-east direction and has only 7 properties on it, greatly overshadowed by Bridstow Place, a Mews Style street that is situated next to Bott’s Mews.

During World War II, a high explosive bomb is recorded falling onto Artesian Road, but Bott’s Mews was largely unaffected. The cul-de-sac is recorded as having a mixed classification of poverty when the London Poverty Maps were first published. Some households had comfortable living conditions whilst others were seen as poor in comparison.

Bott’s Mews is part of Westminster City Council’s Westbourne Conservation Area. The area was transformed from a hamlet with fields in cultivation to a metropolitan suburb in the space of about 15 years, starting in the early 1840s. The houses in Westbourne were mainly built for prosperous professionals, explaining why there are only a handful of mews spaces, though where these occur they have significant townscape value and historic interest.

The two storey buildings have raised party walls and a mixture of pitched and parapet roofs. The facade of the properties is a variety of painted and rendered brickwork. The right hand side is modern mews-style whilst the left hand side contains original mews properties. Inscribed on the outside is ‘K P 1860 No 15’.

Originally the stable accommodation for the main properties in Westbourne Grove, the Mews is still used commercially, but nowadays as a garage rather than for equestrian purposes. Very few planning applications have been made since 2003 and only for minor alterations. Conservation Area controls now apply to any new development in the Mews. 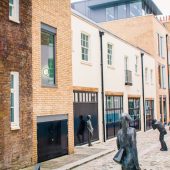