Situated within Inner London in the Borough of Camden, is Belsize Court Garages; a cobbled through road off Belsize Lane, leading to Belsize Place (a Mews Style street). The Mews contains 8 properties used for residential purposes. 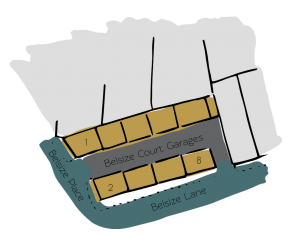 The Mews is part of the Belsize Park Conservation Area; designated in 1973 and then extended in 1984 to included part of Belsize Grove, the area is large scale, containing semi-detached Victorian Villas along with Belsize Village bringing charm to the otherwise uniform appearance of the buildings within the area. The most recent extension to the Conservation Area centers around the incorporation of the open space at the southern side of Elizabeth Mews and the shopping parades on Haverstock Hill. Elizabeth Mews was included into the area in 1991.

A high explosive bomb fell onto Belsize Lane, very close to the Mews, presumably causing significant damage to the properties in World War II and when the London Poverty Maps were first published, the area was deemed to have very comfortable living conditions with higher than average household earnings for the time.

Built in 1880 as Livery Stables and retaining many original features such as garage doors and sash windows, the two storey properties have rendered and painted brickwork facades and mansard or pitched roof styles, surrounded by a cobbled road surface with intact and converted garages. 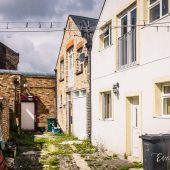 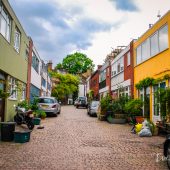