Weymouth Mews is a cobbled through road between Weymouth Street and New Cavendish Street in Westminster, containing a cul-de-sac section and being approached through a entrance under a building. The Mews contains 55 properties used for residential and commercial purposes (houses and pubs). 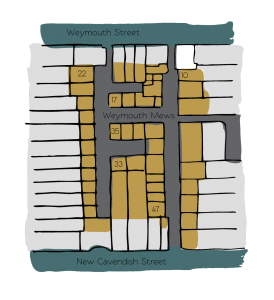 In 1940, a high explosive bomb is recorded falling onto Portland Place, west of the Mews. When the London Poverty Maps were published, the area was noted as having comfortable living conditions with average household salaries.

Weymouth Mews is situated to the east of the Harley Street Conservation Area in Westminster. First designated in 1968, the area is now dominated by terraced houses of different periods and different levels of social status. It retains a substantial medical presence, whilst offices predominate to the eastern edges.

The three storey buildings are made from plain and rendered brickwork and have a mixture of mansard, gable and parapet roof styles. The road surface is cobbled and there are raised pavements present.

35/ 42 Weymouth Mews was the location of an auxiliary Ambulance station during the Second World War. Number 16 served as the accommodation for the Ambulance staff.

Before and since 2003 there have been many planning applications made for alterations to the properties, most notably; changes to the fenestration, roof extensions and partial or complete demolition of certain properties. Conservation Area controls apply to any new development in the Mews.