Western Mews is a cobbled cul-de-sac approached through an entrance under a building on Great Western Road in Westminster. The Mews contains 10 properties used for both residential and commercial purposes. 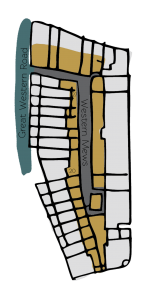 Between October 1940 and June 1941, a high explosive bomb is recorded falling onto Harrow Road, just west of the Mews. The area was noted as having a mixture of living standards when the London Poverty Maps were first published. Some households were considered normal for the time whilst others were deemed poorer in comparison.

Western Mews is not part of a Conservation Area. It is made up of two storey properties with a plain brickwork facade. The roofs are hidden behind parapet walls. The Mews also has modern buildings and a block of flats along the cobbled road as well as the traditional Mews properties.

The original purpose of the Mews was to provide stabling for the surrounding properties on Great Western Road but nowadays they are primarily used for residential purposes although some commercial activity still remains. There have been many planning applications made prior to and since 2003, notably roof extensions and changes to the fenestration and exteriors of the properties. Conservation Area controls now apply to any new development in the Mews. 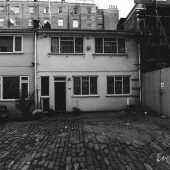