Situated within Inner London in the Borough of Camden, is Steeles Mews North; a cobbled cul-de-sac approached through its own arch on Steeles Road, opposite Steeles Mews South, containing redeveloped Mews properties. The Mews contains 7 properties used for residential purposes.

The Mews is part of the Eton Conservation Area; originally designated in December 1973 and extended in 1988 to include a part of Steele’s Mews, the area has been split into four sub-areas, each with their own defining characteristics. The two Mews were built, mostly by 1866 (not counting Steele’s Mews North) to service the Haverstock hill properties and the dwellings on Steele’s Road. There are not many Mews in the area, and the somewhat modest scale of development suggests the area was not aimed at Horse and Carriage owners.

A high explosive bomb fell onto Steeles Road, right outside the Mews, presumably causing significant damage to the properties in World War II and when the London Poverty Maps were first published, the area was deemed to have very comfortable living conditions.

The two storey properties have plain brickwork facades and pitched roof styles, surrounded by a cobbled road surface. There are balconies, raised party walls and many plants along the road.

Before and since 2003 there have been a number of planning applications made for alterations to the properties within the Mews, the most notable being; garage conversions for additional residential space and alterations to the fenestration. Conservation Area controls apply to any new development in the Mews. 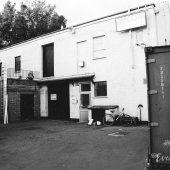 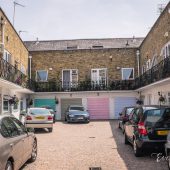