St. Stephen’s Mews is a cobbled cul-de-sac off Chepstow Road in Westminster. The Mews has 12 properties on it, used for residential and commercial purposes. 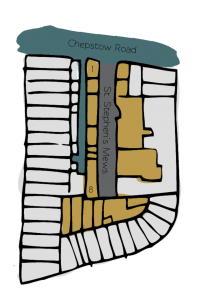 During World War II, a high explosive bomb is recorded falling onto Talbot Road, not far from the Mews. The cul-de-sac is recorded as having a middle class classification of poverty when the London Poverty Maps were first published.

St. Stephen’s Mews is part of Westminster City Council’s Westbourne Conservation Area; transformed from a hamlet with fields in cultivation to a metropolitan suburb in the space of about 15 years, starting in the early 1840s. The houses in Westbourne were mainly built for prosperous professionals, explaining why there are only a handful of mews spaces, though where these occur they have significant townscape value and historic interest.

The two and three storey buildings have mansard roofs and a mixture of painted or rendered brickwork facades. The road surface is cobbled and parking is restricted.

Originally the stable accommodation for the main properties in St. Stephen’s Gardens, the Mews is now predominantly used residentially rather than for equestrian purposes, though some commercial activity still remains in the form of offices. A few planning applications have been made before and since 2003, mainly regarding the use of the properties as offices. Conservation Area controls now apply to any new development in the Mews. 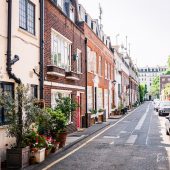