St Luke’s is a long and narrow cobbled Mews. It is divided into two distinct parts by the All Saints Road (once associated with the Notting Hill Riots in 1987). One end is entered through a building in St Luke’s Road the other end from Basing Street. The two sections align and have distinctly different characters although they are of similar size and scale. The section between Basing Street and All Saints Road has been redeveloped and can no longer be considered an original/surviving Mews. 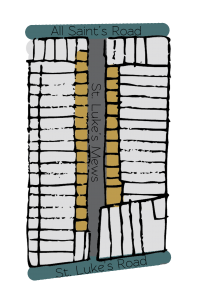 The original two storey buildings have been altered and extended and are now largely three storeys high with Mansard roofs above brickwork elevations that are both painted and undecorated. Roof gardens with railed terraces are now a common feature.

Bomb damage occurred in 1940 and several properties had to be rebuilt as a result. There are varied elevations and windows with replacement sashes and new larger windows combined with (Juliet) balconies. There is also a mixture of retained and replacement stable doors. Some of the Mews buildings have windows to the rear.

St Luke’s Road marks the boundary between the Royal Borough of Kensington and Chelsea and the City of Westminster.

27 St Luke’s Mews was a location used during the filming of the Richard Curtis film, Love Actually.

St Luke’s Mews judged on its section containing the original/surviving Mews, rather than both parts, is a good example of an original/surviving Mews. These Mews originally served as stable and/or coach house accommodation for the larger properties in Lancaster Road and Westbourne Park Road. It is long since these properties have required accommodation for equine purposes and they are now largely divided into flats.

Numerous planning applications have been made since 2003. Planners have allowed balconies at the front and roof gardens, and it is notable that the majority of refurbished Mews now have railings around roof terraces which contain planting.

There was little evidence of basements construction activity evident but some planning applications have been made for these excavations. Offices have generally been replaced by residential although some mixed use remains. 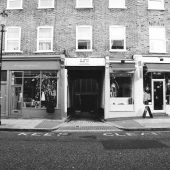 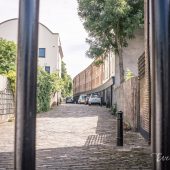