St. Anselm was a Benedictine Monk, philosopher and a prelate of the Church who held the office of Archbishop of Canterbury from 1093 to 1109.

St. Anselm’s Place is a through road between Davies Street and Gilbert Street in Westminster. The Mews contains only 5 properties and is oriented in an east-west direction, close to Davies Mews, another original/surviving Mews accessed from Davies Street.

In 1940, a high explosive bomb is recorded falling somewhere on South Molton Lane, just north-east of the Mews.

On the site until 1939 was Balfour & Turner’s church of St Anselm, of 1894 – 6. No. 23 St. Anselm’s Place is a tiny residence built in 1966-7 by Claud Phillimore, for the 4th Duke of Westminster. The two and three storey, plain and painted brickwork buildings have a mixture of mansard, gable and parapet roofs surrounded by a tarmacadam road surface and raised pavements.

Originally the stable blocks for the main terraces in the surrounding area, the properties are now used for both residential and commercial purposes, in the form of small businesses. Some of the properties have been redeveloped. Conservation Area controls apply to any new development in the Mews. 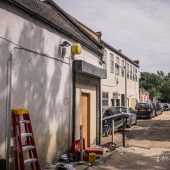