Southwick Mews is a through road that is parallel to Rainsford Street but sufficiently separate from it to have avoided the bomb damage during World War II that Rainsford Street suffered. The Mews comes within the Church Commissioners Hyde Park Estate and is also within Westminster City Council’s Bayswater Conservation Area. In earlier times it was identified and recorded on the poverty maps for the period as one of the most impoverished areas in London. 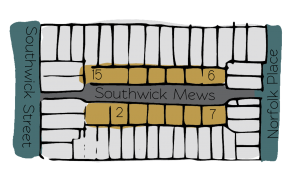 The Mews is cobbled and the properties have narrow uniform brickwork elevations of consistent height. The majority are undecorated but a few are painted. Most have slate covered Mansard roofs. One central property is covered in foliage and there is generally more foliage than in other Mews nearby.

Southwick Mews is a good example of an original/surviving Mews. The Mews originally provided stable/coach house accommodation for the larger houses in Star Street and Sussex Gardens which run parallel to the Mews. The original two storey buildings have been altered and extended and are now mainly three storeys high. Now it is predominantly in residential use, but there remains some commercial use with offices on the ground floor of some Mews.

Numerous planning applications have been made for alterations both before and after 2003. Notable works along the Mews include roof alterations with the addition of roof terraces to a number of Mews. There have also been changes to the doors and fenestration but these appear to have been done in a restrained fashion. Original Mews features including a good array of stable doors with strap hinges have been retained. 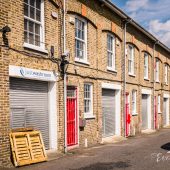