Seymour Mews is a part-cobbled through road between Wigmore Street and Fitzhardinge Street in Westminster, with two additional cul-de-sac sections. The Mews contains 11 commercial and residential properties and has been partially developed along the through-road section. 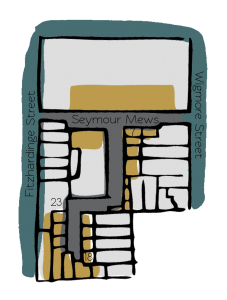 In 1940, a high explosive bomb is recorded falling onto Manchester Square, just above the Mews. When the London Poverty Maps were published, the area was noted as having comfortable living conditions with average household salaries.

Seymour Mews is a part of Westminster City Council’s Portman Estate Conservation Area; situated in the boundaries of Marylebone, which was once covered with forest and marshland, the estate originally comprised about 270 acres and now contains a variety of buildings from different centuries, from many examples of Mews to the grand terraces of Bryanston Square and Montagu Square.

The variety and number of Mews developments is an important feature within the area. On the eastern side of the conservation area are a series of mews which run through the Portman Estate on a continuous north-south axis. Sherlock Mews, Kenrick Place, Broadstone Place, Kendal Place, Baker’s Mews and Seymour Mews.

The two and three storey, plain brickwork buildings have a mixture of mansard, pitched and parapet roof styles surrounded by a cobbled and tarmacadam road surface with partial raised pavements. Wigmore Street was used as a filming location for the 1995 Film, ‘The Long Good Friday’.

Originally the stable accommodation for the surrounding properties, the primary function of the Mews is still partly commercial, with offices being present in the properties. Before and since 2003 there have been a few planning applications made for alterations to the properties, most notably some small external alterations and demolition of internal partitions in one property. Conservation Area controls apply to any new development in the Mews. 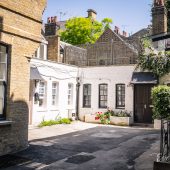 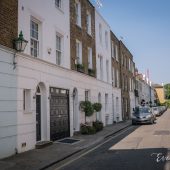