Princes Place is a through road off Princedale Road in the Royal Borough of Kensington and Chelsea, leading to Queensdale Road, opposite Queensdale Walk, also containing original/ surviving Mews properties. It contains 51 properties used for residential purposes. 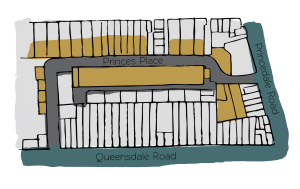 At some point between October 1940 and June 1941, a high explosive bomb fell onto Pottery Lane, another surviving Mews just east of Princes Place. The Mews was noted as having a mixture of comfortable living conditions with lower than average, household earnings for the time when the London Poverty Maps were first published.

The two and three storey properties have rendered or painted brickwork facades with a variety of mansard, gable and pitched roof styles, surrounded by a tarmacadam road surface and raised pavements. There are also bollards to be seen in the Mews. The buildings are mainly modern blocks of flats now, with only a few original Mews remaining.

Number 17b Princes Place is a Grade II Listed Building, described as a Mews House over Garages, 1969-70.

Originally the stable/ coach house accommodation for the main houses on St James’s Gardens and Queensdale Road, the primary purpose of the Mews properties is now residential. 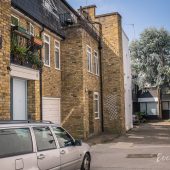