Osten Mews is a cobbled cul-de-sac and through road off Emperor’s Gate in the Royal Borough of Kensington and Chelsea, leading onto McLeod’s Mews (also containing original/ surviving Mews properties). Osten Mews contains 23 properties, used for residential and commercial purposes.

During World War II, the Aggregate Night Time Bomb Census recorded a high explosive bomb falling onto Cromwell Road, south-west of the Mews. In the past, the area was noted as having a mixture of comfortable and poorer living conditions, in contrast to the nearby McLeod’s Mews, which was seen as being one of the wealthiest areas in the City.

The Mews is part of the ‘Cornwall’ Conservation Area. The De Vere Conservation Area was originally designated in 1969 as Kensington New Town, with the other two linked areas (Kensington Court and Cornwall) being designated separately soon after. In 1985, the boundaries were modified and revised.

The two storey properties have rendered or painted brickwork facades with a mixture of different roof styles, surrounded by a cobbled road surface. There are plants and seats present in the Mews, along with raised party walls. Train tracks run behind and under a section of the Mews. An episode of ‘The Sweeny’ (1977) used the Mews as a filming Location.

Originally used as the coach house/ stable accommodation for the main houses on Emperor’s Gate and Cornwall Gardens, the primary purpose of the Mews properties is now residential, though some commercial activity still remains.

Before and since 2003 there have been very few planning applications made for alterations to the properties within the Mews; most concerning the usage of the properties. 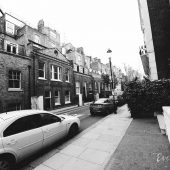