Old Barrack Yard, off Grosvenor Crescent Mews (another original/ surviving Mews) is a part-cobbled cul-de-sac that is approached through an entrance under a building. There are 14 properties in the Mews, used for residential and commercial purposes.

A high explosive bomb fell directly onto Grosvenor Crescent Mews in World War II, meaning the properties within had to be rebuilt as a result of the damage that occurred. When the London Poverty Maps were published, the area was determined as having fairly comfortable living conditions and households with good ordinary earnings.

Old Barrack Yard is part of Westminster City Council’s Belgravia Conservation Area; first designated in 1968, it was laid out as a fashionable residential area to the west of Buckingham Palace. There is a high degree of townscape uniformity and a formal layout based on a grid pattern. The area is predominantly residential with some shops on the edges. There are also a significant number of embassies, diplomatic buildings and institutional headquarters.

The Mews, built c.1837-41 has two and three storey, painted and plain brickwork buildings with a mixture of different roof styles. The garages vary between intact and converted, and are surrounded by a part-tarmacadam, part-cobbled road surface. The Mews becomes pedestrian only at the end section and has raised pavements at the entrance where the cobbles are situated. Numbers 17, 19 and 21 and 28-36 are Listed Buildings.

The original purpose of the Mews was to provide stable/ coach house accommodation to the main houses in the surrounding street. Now, it is used for a mixture of residential and commercial purposes.

A few planning applications have been made before and since 2003 mainly regarding changes to the fenestration, roof extensions internal alterations. Conservation Area controls now apply to new development in the Mews. 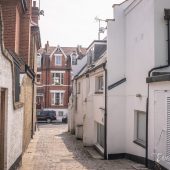