On the northern side of London Street in Westminster, between London Mews and Radnor Mews, is Norfolk Square Mews, a small cul-de-sac with a tarmacadam road surface. The Mews contains business properties, a doctor’s flat, a pub and garages. All three of these Mews streets are orientated in a south-west to north-east direction. There is only 1 official Mews property in the cul-de-sac. 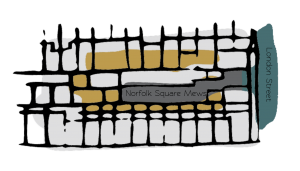 The area surrounding Norfolk Square Mews was affected by bombing in World War II, particularly London Street and Conduit Place (also containing surviving Mews properties). When the poverty maps of London were first published, the area was noted to have a fairly comfortable standard of living with good earnings.

The Mews has partial pavements upon a tarmacadam surface. The buildings are painted and rendered and vary between one and two storeys.

Some of the properties backing onto the Mews courtyard have had planning applications permitted to erect mansard roofs and excavate basements. The Mews property itself has undergone similar alterations, converted from a single storey property into a two storey house with integral garage and basement area.