Napier Place is a cobbled through road off Napier Road in the Royal Borough of Kensington and Chelsea, leading to Holland Road. It contains 51 properties used for residential purposes.

When the London Poverty Maps were published, the area was noted as having a mixture of comfortable living conditions and lower than average household salaries. A high explosive bomb fell nearby onto Russell Road in World War II, just west of the Mews.

The Mews is part of the ‘Holland Park’ Conservation Area. Bounded in the North by Holland Park Avenue and to the south by Kensington High Street, the area was formed in 1981 by combining two smaller Conservation Areas. The new area is centred around Holland Park, a green open space and the grounds of Holland House serving Notting Hill, Hammersmith and Kensington.

Built around 1857; the one, two and three storey properties have a mixture of different roof styles and rendered or painted brickwork facades. Parking varies between allocated and restricted along the cobbled road, with flush pavements to be seen, as well as some raised party walls.

Originally the stable house accommodation for the main houses on the surrounding streets, the primary purpose of the Mews properties is now residential.

Before and since 2003 there have been a great deal of planning applications made for alterations to the properties in Napier Place, most notably; roof extensions or additions and the demolition of some of the existing buildings. Conservation Area controls apply to any new development in the Mews. 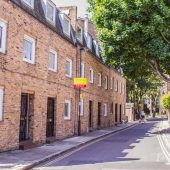