Situated within Inner London in the Borough of Camden, is Murray Mews; a cobbled through road off Murray Street and not far from Cobham Mews, a redeveloped Mews. The Mews contains 41 properties used for residential and commercial purposes. Murray Mews is about a third of the length of Camden Mews.

A high explosive bomb fell onto St. Augustine’s Road, right next to the Mews; presumably causing significant damage to the properties in World War II and when the London Poverty Maps were first published, the surrounding area was deemed to have comfortable living conditions.

The two storey properties have plain brickwork facades with a gable roof styles, surrounded by a cobbled road surface with raised pavements. Only 5 of the properties on the Mews were built by 1894. Number 29 was built in 1965-9 by and for Richard Gibson, number 30 by and for Jeff Kahane in 1992, number 22 by Tom Kay in 1970-1, number 43 in 1974-5 by John Townsend and numbers 15-19 in 1964-5. The Mews represents areas of artists and architects studios that became popular in the early 1960’s.

Before and since 2003 there have been many planning applications made for alterations to the properties within the Mews, the most notable being; roof and front extensions, the demolition of some garages and changes to the fenestration. Conservation Area controls apply to any new development in the Mews. 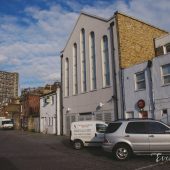