Lucerne Mews is a cobbled cul-de-sac off Kensington Mall in the Royal Borough of Kensington and Chelsea. Lucerne Mews contains 11 properties, used for residential and commercial purposes. 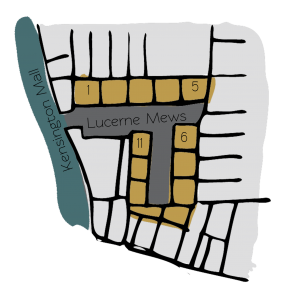 During World War II, the Aggregate Night Time Bomb Census recorded a high explosive bomb falling onto Rabbit Row, opposite the Mews. In the past, the area was noted as having comfortable living conditions and ordinary household earnings for the time when the London Poverty Maps were first published, though some houses were slightly poorer in comparison. The Mews is part of the ‘Kensington Palace’ Conservation Area.

Built in 1839 with many surviving original features, the two storey properties have plain brickwork facades with a variety of gable, parapet and pitched roof styles, surrounded by a cobbled road surface. Only one modern building is present at the end of the Mews, all the others are original.

Originally used as the coach house/ stable accommodation for the main houses on the surrounding streets, the primary purpose of the Mews properties is now a mixture of residential and commercial.

Before and since 2003 there have been a few planning applications made for alterations to the properties in Lucerne Mews, most notably; changes to the existing fenestration, demolition of an existing garage and the change of use of a property to an Osteopathy Clinic.