Situated within Inner London in the Borough of Camden is Lancaster Stables; a cobbled and gated cul-de-sac off Lambolle Place, in line with Eton Garages also containing original/ surviving Mews properties. The Mews contains 5 properties used for residential and commercial purposes.

A high explosive bomb fell onto Belsize Park Gardens, just east of the Mews, presumably causing significant damage to the properties in World War II and when the London Poverty Maps were first published, the area was deemed to have very comfortable living conditions with some of the highest household earnings for the time.

The two and three storey properties have rendered and painted brickwork facades with a mixture of mansard and parapet roof styles, surrounded by a cobbled road surface. 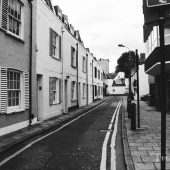