Situated within Inner London in the Borough of Camden, is John’s Mews; a cul-de-sac off Northington Street and a through road opposite leading to Doughty Mews, also containing original/ surviving Mews properties. The Mews contains 29 properties used for residential and commercial purposes. 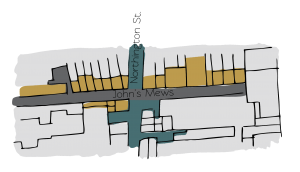 The Mews is part of the Bloomsbury Conservation Area; Covering approximately 160 hectares from High Holborn to Euston Road and King’s Cross Road to Tottenham Court Road, the area was designated in 1968. Due to the size of the Conservation Area, there is no one defining character but rather a collection of different sub-areas and their own characteristics. Most of the historic characteristics of the area are now confined to the Mews or privately maintained areas.

A high explosive bomb fell onto Cockpit Yard, right next to the Mews, presumably causing significant damage to the properties in World War II and when the London Poverty Maps were first published, the area was deemed to have comfortable living conditions.

The two and three storey properties have rendered and painted brickwork facades with mansard roof styles, surrounded by a tarmacadam road surface and a mixture of raised and flush pavements. Most of the northern end of the Mews has been recently redeveloped and the west side is quite open due to a one-storey Primary School. Number 13 is a former brewery stables and numbers 16 and 19-21 are 19th Century Townhouses.

Before and since 2003 there have been many planning applications made for alterations to the properties within the Mews, the most notable being; first and second floor and roof extensions, the amendment of a balcony, the change of use to residential and other internal and external alterations. Conservation Area controls apply to any new development in the Mews. 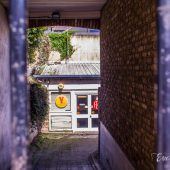