Situated within Inner London in the Borough of Camden, is Jeffrey’s Place; a cobbled through road off Jeffrey’s Street and leading to Prowse Place, containing Mews Style properties. The Mews contains 21 properties used for residential and commercial purposes. 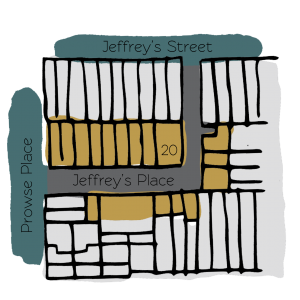 The Mews is part of the Jeffrey’s Street Conservation Area. Named after one of the oldest complete streets in Camden, laid out around 1800, the Conservation Area was designated on 12th November 1985 and it is made up of quiet, residential streets and narrow lanes; mostly 18th and 19th Century houses between areas of green open space. The North London Railway intersects the southern end of the Conservation Area.

When the London Poverty Maps were first published, the area was deemed to have comfortable living conditions with ordinary household earnings for the time.

The two storey properties have plain and painted brickwork facades with gable roof styles, surrounded by a cobbled road surface and raised pavements. The houses on the north side of the road were built in the 1970’s, similar in style to the buildings on Prowse Place.

Before and since 2003 there have been many planning applications made for alterations to the properties within the Mews, the most notable being; the demolition of existing garages/ workshops and alterations to the fenestration. Conservation Area controls apply to any new development in the Mews. 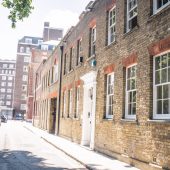