Inverness Mews is a cul-de-sac off Inverness Place Westminster, running in a south-north orientation. There are 8 properties in the Mews, used for commercial purposes.

A high explosive bomb fell nearby onto Moscow Road in World War II, west of the Mews. When the London Poverty Maps were published, the area was determined as having a mixture of fairly comfortable households with good ordinary earnings to poorer living conditions in comparison.

Inverness Mews is part of Westminster City Council’s Queensway Conservation Area. Originally Westbourne Green Lane, then Black Lion Lane, the basis for the area was renamed Queen’s Road and then finally Queensway between 1840 and 1870 when main development took place. The area was designated a Conservation Area in 2002. It is a small Conservation Area with a mixed character and a variety of building types, styles and uses. The townscape has a very urban feel being lined with terraces and mansion flats and behind the commercial frontages to the rear of Queensway are the quiet enclaves of mews.

The Mews has two and three storey, brickwork and rendered buildings with a mixture of mansard and parapet roof styles. The garages present are a mixture of intact and converted and surrounded by a tarmacadam road surface.

The original purpose of the Mews was to provide stable/ coach house accommodation to the main houses on Inverness Terrace. Now, it is predominantly still used for commercial activity including educational purposes.

A few planning applications have been made before and since 2003 for alterations to the properties, mainly concerning roof extensions, internal alterations and the change of use to residential. Conservation Area controls now apply to new development in the Mews. 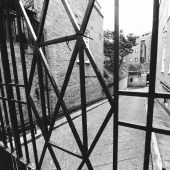