Holbein Mews is a part-cobbled through road off Holbein Place in the Royal Borough of Kensington and Chelsea, leading to Lower Sloane Street. Holbein Mews contains 14 properties, used for residential and commercial purposes.

In the past, the area was noted as having poorer living conditions and lower than average household earnings when the London Poverty Maps were first published. During World War II, a high explosive bomb fell onto Sloane Gardens, just above the Mews, presumably causing some damage to the properties within.

The Mews is part of the ‘Sloane Square’ Conservation Area; designated in 1985, having been redeveloped towards the end of the 19th Century, it contains a high density of red brick buildings and is bounded by the Royal Hospital and Hans Town Conservation Areas. It contains a number of Listed Buildings including the Holy Trinity Church.

The two and three storey properties have rendered or painted brickwork facades with a variety of mansard, gable and pitched roof styles, surrounded by a cobbled and tarmacadam road surface. There are lots of plants and a few winches present in the Mews, in addition to raised party walls on some of the properties.

Originally used as the coach house/ stable accommodation for the main houses on Sloane Gardens and Holbein House (off Holbein Place), the primary purpose of the Mews properties is now residential, though some commercial activity still remains.

Before and since 2003 there have been very few planning applications made for alterations to the properties in the Mews; mainly regarding the addition of railings to the rear of a property and a two storey subterranean extension to one of the dwelling houses. Conservation Area controls apply to any new development in the Mews. 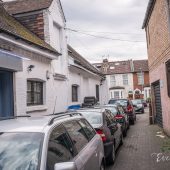