Denbigh Mews is a cobbled cul-de-sac approached through an entrance under a building on Denbigh Street in Westminster. The Mews contains 3 properties used for commercial purposes and is gated at the entrance. 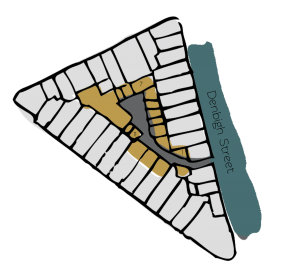 In 1940, a high explosive bomb is recorded falling just outside the Mews on Denbigh Street, resulting in the properties having to be rebuilt. When the London Poverty Maps were published, the area was noted as having comfortable living conditions with average household salaries.

Denbigh Mews is situated within Westminster City Council’s Pimilico Conservation Area. Constructed over a short period (1830’s to 1870’s), the area has a layout of formal streets and squares, lined by terraces of houses in the Classical tradition. The Mews are situated behind the squares and fill in the street blocks. They are characterised by a more intimate setting than the main streets and are often entered through an archway. The buildings typically consist of two storeys and are generally scaled width-wise to the same size as the main properties that they are linked to.

There are offices in the Mews designed by Dave Hobday Designs around 1980. The two storey properties are plain brickwork and have roofs hidden behind parapet walls.

Originally the stable accommodation for the surrounding properties on Warwick Way, Denbigh Street and Belgrave Road, the primary function of the Mews is still commercial, with offices being present in the properties. Before and since 2003 there have been a few planning applications made for alterations to the properties, mainly the use of garages as residential accommodation and security gates erected in 2000. Conservation Area controls apply to any new development in the Mews. 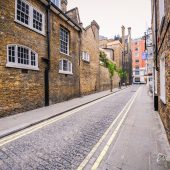