Dean’s Mews is a cobbled cul-de-sac, approached through its own arch off Cavendish Square in Westminster. The Mews contains about 20 properties used for both residential and commercial purposes. The cobbles, however are not original and some area of tarmacadam still remains. 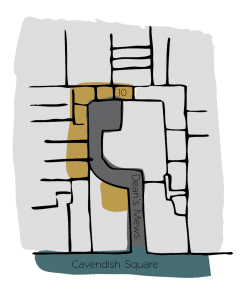 In 1940, a high explosive bomb is recorded falling somewhere on Harley Street, just to the west of the Mews. When the London Poverty Maps were published, the area was noted as having comfortable living conditions with average household salaries.

Dean’s Mews is situated to the south of the Harley Street Conservation Area in Westminster. First designated in 1968, the area is now dominated by terraced houses of different periods and different levels of social status. It retains a substantial medical presence, whilst offices predominate to the eastern edges.

This winding Mews contains a mix of historic and modern infill buildings. Those on the west side of the mews form part of the Grade II listed terrace at 8-10 Harley Street. A pair of historic mews buildings survive on the north side ofDean’s Mews. The four storey properties have a plain brickwork facade and mansard roofs.

There are no records of planning applications for alterations to the Mews available. 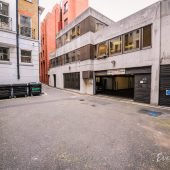 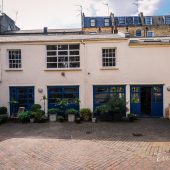