Clarke’s Mews is a cobbled cul-de-sac off Beaumont Street in Westminster. The Mews contains 4 properties and is linked to Dunstable Mews, another original/ surviving Mews through a pedestrian thoroughfare. The Mews has a mixture of traditional and modern buildings and is used for residential purposes. 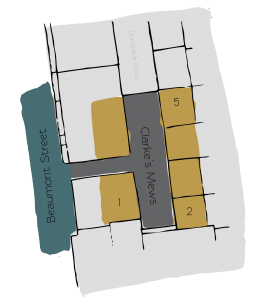 Between October 1940 and June 1941, a high explosive bomb is recorded falling onto the northern end of Beaumont Street. The area was noted as being fairly comfortable with good, ordinary household earnings when the London Poverty Maps were first published.

Clarke’s Mews is situated to the west of the Harley Street Conservation Area in Westminster. First designated in 1968, the area is now dominated by terraced houses of different periods and different levels of social status. It retains a substantial medical presence, whilst offices predominate to the eastern edges.

Clarke’s Mews and Dunstable Mews form a single continuous stretch with a street level change between the two where they are joined together by stone steps. The predominantly residential use is evident in the character. There is a mixture of good quality timber coach doors and some replacement garage doors.

The two storey, painted brickwork buildings in Clarke’s Mews have roofs hidden behind parapet walls and a cobbled road surface.

Originally the coach house accommodation for the main properties in Beaumont Street and Upper Wimpole Street, the buildings are now used residentially. There have been a few planning applications made prior to and since 2003 mainly smaller changes to the fenestration although the roof and front facade of a property were demolished and rebuilt. Conservation Area controls now apply to any new development in the Mews. 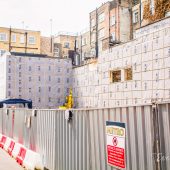