Clarges Mews is a cobbled cul-de-sac in Westminster, accessed from Clarges Street. There are 11 properties in the Mews used for both residential and commercial purposes.

In 1940, a high explosive bomb is recorded falling somewhere between Clarges Mews and Clarges Street, meaning many of the properties had to be rebuilt, hence the current mews not showing any evidence of previous equestrian usage.

Clarges Street, leading to the Mews and running along Green Park was laid out by Sir Thomas Clarges in 1691 and built up from the early 18th Century. The two and three storey properties in the Mews show a mixture of plain and painted brickwork, with a variety of different roof styles including mansard, gable and parapet. The road surface is cobbled with flush pavements.

The original purpose of the Mews was to provide stabling for the surrounding properties on Charles Street but nowadays they are primarily used for residential purposes although some commercial activity still prevails. There have been many planning applications made since 2003; mainly smaller internal changes and replacement garage doors fitted. Larger alterations have been carried out to the main properties on Charles Street. Conservation Area controls now apply to any new development in the Mews. 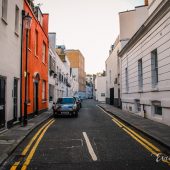