Cavendish Mews South is a cobbled cul-de-sac approached through an entrance under a building on Hallam Street. The L-shaped Mews has 3 properties and is similar to Cavendish Mews North, another original/ surviving Mews in terms of size and location. 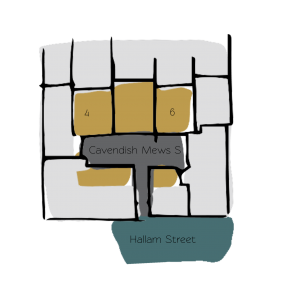 In World War II, a high explosive bomb fell onto Great Portland Street, a fair distance from the Mews. When the London Poverty Maps were published, the area was described as being comfortable with normal household earnings.

Cavendish Mews South is situated to the east of the Harley Street Conservation Area in Westminster. First designated in 1968, the area is now dominated by terraced houses of different periods and different levels of social status. It retains a substantial medical presence, whilst offices predominate to the eastern edges.

This small Mews has only three buildings; typical two storey yellow-stock-brick buildings, retaining original windows and door openings. There are metal roller shutters to the ground floor and granite setts and stone bollards are also present. The roofs are hidden behind parapet walls.

This mews for Portland Place originally had the purpose of stable accommodation, but is now used residentially. Since 2003 there have been very few planning applications made for alterations to the properties in the Mews, notably the complete demolition of two of the properties and a new roof for the remaining one. Conservation Area controls now apply to any new development in the Mews.