Situated within Inner London in the Borough of Camden is Camden Mews; a very long, cobbled through road approached through an entrance under a building on Camden Park Road. The Mews contains 110 properties used for residential and commercial purposes. When the London Poverty Maps were first published, the area was deemed to have a mixture of comfortable and poorer living conditions.

The two storey properties have rendered and painted brickwork facades with a mixture of gable and parapet roof styles, surrounded by a cobbled road surface with raised pavements. Number 62 was built by and for Edward Cullinan from 1962-65, number 66 Camden Square at the corner of the Mews is a larger house built 1984-5 and number 2 Camden Mews was built 1988-9 by Tom Kay. Camden Mews is one of the longest Mews in London, second only to Pavilion Road in Kensington (720m and 900m respectively) and represents an area of artists and architects studio houses, which became popular in the early 1960’s onwards.

Before and since 2003 there have been many planning applications made for alterations to the properties within the Mews, the most notable being; garage conversions and alterations to the fenestration. Conservation Area controls apply to any new development in the Mews. 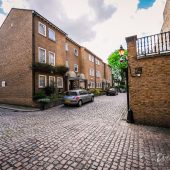 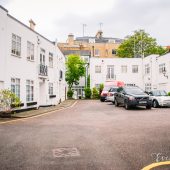