Brook’s Mews is a through road between Davies Street and Avery Row in Westminster. The Mews contains 13 properties and is oriented in a west-east direction. 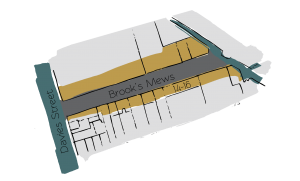 In World War II, a high explosive bomb is recorded falling directly onto Brook’s Mews, resulting in the buildings having to be rebuilt. The area was regarded as having comfortable living conditions when the London poverty Maps were originally published.

Brook’s Mews is part of Westminster City Council’s Mayfair Conservation Area; first designated in 1969, it derives its name from a fair held in the month of May in fields around the site of today’s Shepherd Market. The area is dominated by fashionable town-houses (and their mews) reflecting the history of English domestic architecture from the early 18th to the early 20th century.

The Mews contains three and four storey, plain brickwork properties with a mixture of mansard and parapet roofs. The road surface is tarmacadam and parking is restricted. The garages present are intact though the street itself has been largely redeveloped and is used for commercial purposes.

The Mews was originally the stable/ coach house accommodation for the larger houses in Grosvenor Street and Brook Street. Though the street is largely redeveloped now, the remaining properties are still used for commercial purposes. Before and since 2003 there have been a great deal of planning applications made for alterations to the properties within the Mews including basement excavations, roof extensions, the placement of tables and chairs in connection with the existing restaurant and bar in one of the properties and other smaller alterations to both interior and exterior facets of the properties. Conservation Area controls now apply to any new development in the Mews.