Berkeley Mews is a through road between Seymour Street and Upper Berkeley Street in Westminster. The Mews runs approximately north-south and has a cul-de-sac section half way down. Berkeley Mews has 17 properties used for both commercial and residential purposes. 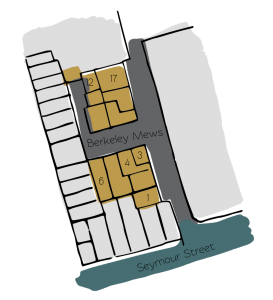 A high explosive bomb is recorded falling onto the south-west corner of Portman Square, very close to the Mews in World War II. Berkeley Mews was in an area deemed to have a mix of ordinary household earnings and comfortable living conditions to poorer households.

Berkeley Mews is a part of Westminster City Council’s Portman Estate Conservation Area. Situated in the boundaries of Marylebone, which was once covered with forest and marshland, the estate originally comprised about 270 acres and now contains a variety of buildings from different centuries, from many examples of Mews to the grand terraces of Bryanston Square and Montagu Square.

The two storey buildings vary between plain and painted brickwork, with pitched roofs. There are both converted and intact garages, and restricted parking along the tarmacadam surfaced road. One side of the Mews has been developed and is no longer Mews style.

Originally the stable accommodation for New Quebec Street, the Mews properties are now used for both residential and commercial purposes. A few planning applications have been made since 2003. Most notably the change of use to residential and commercial, and other minor alterations to the interior and exterior of the properties. Conservation Area controls now apply to new development in the Mews. 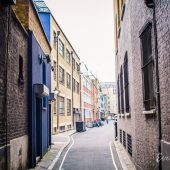