Bentinck Mews is a cobbled cul-de-sac off Marylebone Lane in Westminster. The Mews runs approximately west-east, similar in size and location to Duke’s Mews (another original/ surviving Mews street) and contains 8 properties, used for commercial and residential purposes.

A high explosive bomb is recorded falling onto Welbeck Street, just behind the Mews in World War II. The Mews was in an area deemed to have a mix of ordinary household earnings and comfortable living conditions to poorer households when the London Poverty Maps were published.

Bentinck Mews is situated in Westminster City Council’s Harley Street Conservation Area. First designated in 1968, the area is now dominated by terraced houses of different periods and different levels of social status. It retains a substantial medical presence, whilst offices predominate to the eastern edges.

The two, three and five storey buildings are a mixture of plain and painted brickwork with mansard, gable and parapet roof styles. There is a cast iron bresummer, raised party walls and a metal winch present.

Originally the stable accommodation for Bentinck Street, the Mews properties are now used for both residential and commercial purposes. There is one modern build and two houses have been developed. Several houses have been restored. A few planning applications have been made since 2003 for additional storeys, change of use to residential, basement excavations and other, minor alterations to the properties. 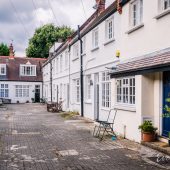