Situated to the west of Hyde Park in Westminster is Balfour Mews, a through road between Aldford Street and South Street. A small Mews; only containing 9 properties, it is similar in terms of size and style to Rex Place, another original/ surviving Mews that runs parallel to Balfour Mews (although Rex Place is actually two sections, continuing on to Mount Street). Both roads are orientated North-South.

In World War II a high explosive bomb fell onto Aldford Street, just to the north of the Mews. Probably replaced as a result of the damage, the surviving Mews belies any evidence of previous equestrian usage. The area was noted as being upper-middle class and wealthy when the London Poverty Maps were first published.

The Mews properties are currently used as residential flats, consisting of two, three and four storeys. The plain brickwork buildings have mansard and gable roofs with a tarmacadam road surface and partial raised pavements on one side of the street. Number 10 is a neo-Georgian house, associated with No.8 Rex Place.

Stabling was provided in Balfour Mews, south of Balfour Place 1898-1900. The east side of the street was designed by Balfour and Turner. The stables served the new houses to the north and west. The Mews itself was a broad yard, open at both ends with the residential sections planned so as to face Aldford Street and South Street.

The original buildings were two storey stables, these have now largely changed and additional storeys have been created. Many planning applications have been made for alterations before and since 2003, notably basement excavations, changes to the fenestration and alterations to the interior of the properties to change the use to residential. 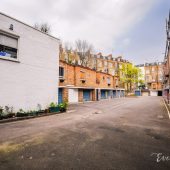