Archery Close is a cobbled cul-de-sac approached through an entrance under a building on Connaught Street in Westminster. The Mews is for the most part linear, following the blocks of terraced development on Connaught Square. Orientated North-South, the Mews is similar to the nearby Connaught Close in terms of scale and location. 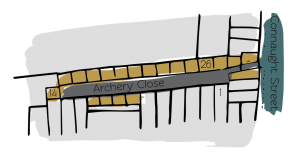 There are 24 properties in Archery Close, used for residential purposes. The two-storey buildings are made up of a mixture of plain and painted brickwork, with a variety of different roof styles.

A high-explosive bomb is recorded falling on the west side of Connaught Square in 1940, nearby to Archery Close and presumably the row of terrace houses were rebuilt as result of this in the 40s and 50s.

The area was recorded as being comfortable with good earnings when the London Poverty Maps were published.

Archery Close is part of the Church Commissioners’ Hyde Park Estate, and Westminster City Council’s Bayswater Conservation Area. It is situated on the north side of Hyde Park, near to Frederick Close, another original/surviving Mews.

The Church Commissioners Hyde Park Estate is considered to be one of the most important works of Georgian town planning in London due to its planned layout of squares, crescents and Mews.

The Mews has seats and pavements one side. Armed police presence restricted the number of photographs that could be taken.

The Mews originally provided stable/coach house accommodation for the larger houses in Connaught Square, which run parallel to the Mews. Few planning applications have been made for alterations both before and after 2003 most notably the amalgamation of a property in Connaught Square with one in Archery Close to create a single dwelling. 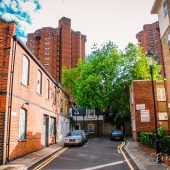 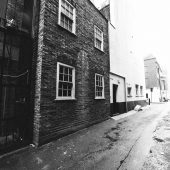