Albert Mews is a private, cobbled cul-de-sac approached through an archway on Victoria Grove in the Royal Borough of Kensington and Chelsea, in line with Canning Place Mews (another original/ surviving Mews). It contains 13 properties used for residential purposes. 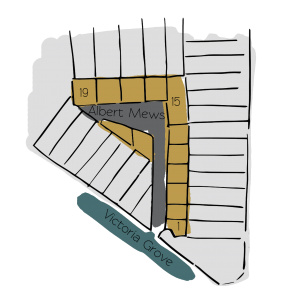 In World War II, a high explosive bomb fell onto Queen’s Gate Mews (also containing original Mews properties), just east of Albert Mews. When the London Poverty Maps were published, the area was noted as having a mixture of normal living conditions and lower than average household salaries.

The Mews is part of Kensington’s ‘De Vere’ Conservation Area; originally designated in 1969 as Kensington New Town, with the other two areas (Kensington Court and Cornwall) being designated separately soon after. In 1985, the boundaries were modified and revised.

The one and two storey properties have gable roof styles and a mixture of plain and painted brickwork facades. Parking is unrestricted along the cobbled road surface and the garages remain intact.

Originally the stable house accommodation for the main houses on Gloucester Road, the primary purpose of the Mews properties is now residential.

Before and since 2003 there have been a few planning applications made for alterations to the properties in Albert Mews; most notably the complete demolition of some of the properties and subsequent rebuilding. Conservation Area controls now apply to new development in the Mews.