Adam’s Row is an Original/ Surviving, through-road between South Audley Street and Carlos Place in Westminster. It runs nearly directly in line with Reeves Mews and Mount Row, both of which contain original/ surviving Mews properties. Adam’s Row contains 12 properties for residential use, businesses and a pub.

In 1940, a high explosive bomb is recorded falling somewhere between Mount Street and Adam’s Row, meaning many of the properties had to be rebuilt, hence the current mews not showing any evidence of previous equestrian usage.

The Mews is part of Westminster City Council’s Mayfair conservation area. First designated in 1969, it derives its name from a fair held in the month of May in fields around the site of today’s Shepherd Market. The area is dominated by fashionable town-houses (and their mews) reflecting the history of English domestic architecture from the early 18th to the early 20th century.

Adam’s Row has been largely redeveloped with only a few original/ surviving Mews remaining. The road surface is tarmacadam and it has raised pavements. The two and three storey properties have gabled roofs and plain brickwork facades. A main entrance to the Millennium Britannia Hotel can be found on the road. The nearby South Audley Street was a filming location for Richard Curtis’ 2003 film, Love Actually.

The original purpose of the Mews was to serve as stable/ coach house accommodation for the main properties in Mount Street when it was known as Adam’s Mews (changing to Adam’s Row in 1937). Since 2003 there have been no planning applications made to any properties on Adam’s Row, only a few to neighbouring streets that would affect the Mews buildings in Adam’s Row in a limited capacity. 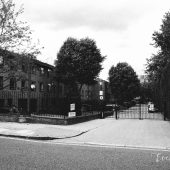