Adam and Eve Mews is a cobbled through-road between Kensington High Street and Allen Street in the Royal Borough of Kensington and Chelsea. It contains 68 properties used for residential and commercial purposes; most notably the Territorial Army Centre.

In 1940, a high explosive bomb is recorded falling directly onto the Mews, meaning many of the properties had to be rebuilt.

When the London Poverty Maps were published, the area was noted as having a mixture of comfortable living conditions with average household salaries to poorer residences.

Adam and Eve Mews still has many of the original double garage doors and first floor hayloft doors. The long stretch of Mews caters for commercial activity whilst the western section provides residential accommodation. The two storey properties have mansard, gable and parapet roof styles and a mixture of different facades, including examples of very decorative brickwork. Parking is restricted along the cobbled road. In Adam and Eve Mews there are stand pipes that bear the name of Thomas Crapper, populariser of the water closet. 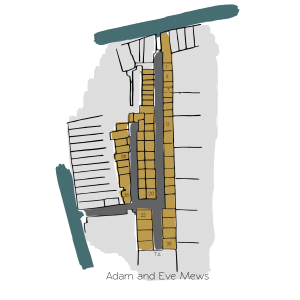 Before and since 2003 there have been a few planning applications made for alterations to the properties on Adam and Eve Mews, most notably; concerning basement excavations and changes to the fenestration. Conservation Area controls now apply to new development in the Mews. 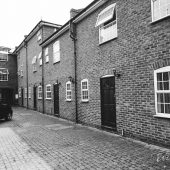