If you have ever wondered, as we at ECM have, how many Mews there are in London, or maybe wondered where most of them are located, possibly even wondered how many are no longer with us, then for answers to these and other questions, please read on.

At ECM we are dedicated to recording the unique and ever-changing nature of  authentic Mews properties in London and to help in this we have categorised them into different types using a number of definitions that we have devised.. This has enabled us to create a database in which we have recorded details of many original and authentic mews, as well as others. This database now covers more than 250,000 data entries and has over 100,000 photos of Mews that are both historical and present. More recently we have added Mews maps which we hope will show at a glance where the various types of Mews are.

The process of locating and recording the Mews data for the maps has been fascinating and revealing and has given a new perspective to our researched records.

Mews locations – London has 32 Boroughs (33 if The City is included) but only half of them have Mews. This is primarily because the Mews generally only exist in the most central London Boroughs, since those were historically the wealthiest areas and only wealthy people originally wanted to construct mews.

In fact, two Boroughs – Westminster and The Royal Borough of Kensington and Chelsea – contain about 80% of existing Mews (Westminster having about 50% and RBKC about 30%). Within Westminster there are 20 Wards and all but three of these contain Mews. The highest number are in Knightsbridge and Belgravia, followed by Marylebone, the West End and Hyde Park wards. The remaining 20% of mews are in other Boroughs of which Camden has about half the number (10% of the total) and others mainly have small shares (generally 1-2%).

Mews configurations – when the development of Mews took place the properties, then considered as third rate dwellings, were built to fit around the principal streets that contained the first rate dwellings. Consequently, the Mews had to fit into spaces that, because of surrounding buildings and roads, were not ideally symmetrical or convenient for development.

The size and shape of the sites that resulted are so varied that it was possible for us to produce a whole alphabet from the shapes of the individual London Mews.

Individual quirks aside, around two thirds of Mews are cul de sacs (having only one point of entry) with the remaining third being mainly through-roads and a small number (less than 10%) having varied layouts best described as “other”.

Mews appearances – Mews are iconic in appearance and, because of the many attractive painted pictures of Mews that exist, are stereotypically imagined to all have painted brickwork, to all be two storeys high with similar elevations, doors and windows, and to all be located in homogenous symmetrical Mews.

The reality is somewhat different.

Only around 5% of Mews are wholly painted, around 27% have plain, undecorated, brickwork elevations, and approximately 22% have a combination of both painted and undecorated elevations. The appearance of the remaining percentage cannot be so easily categorized.

About 50% of Mews have retained stone setts as a road surface, (colloquially known as cobbles), 30% have tarmacadam, 5% have concrete and the remainder have a combination of types.

Fewer than 10% of Mews have freestanding arches at their entrances, whilst just under 20% are approached through entrances beneath buildings; the remainder have entrances that are less defined.

Around 60% of Mews have terraces on both sides of the roadway and roughly 40% have only one terrace remaining, giving a more lop-sided appearance.

Mews features – Mews are often distinguished by characteristic features such as colourful brickwork, entrance arches, carriage doors, haylofts, and cobbles or setts. Not all Mews, however, were built with these features and of those that were not all have retained them.

Mews Landlords.  Many, but not all, Mews are situated in or were built by one or other of the great London Estates, such as the Grosvenor Estate, the Cadogan, the Crown Estate, the Howard De Walden Estate and the Portman Estate.

These London Estates were built on land handed down by Henry VIII to his loyal courtiers after the dissolution of the monasteries and, remarkably, have often stayed in the same families or have been reallocated to other Estates through marriage or commerce. The Estates were then developed by the families who, searching for high returns, would entice purchasers with developments incorporating Mews as ancillary accommodation for the new owners’ horses and servants.

Around 35% of original and surviving Mews are noted to be on an Estate. The Estate with the greatest number of Mews on its land is the Grosvenor, which has almost twice the number of Mews as the Howard De Walden Estate, which is the next in Mews pecking order, shortly followed by the Portman Estate.

Mews planning and conservation area status – this should not be confused with the ECM CCS (Everchangingmews current conservation status) which is our health check for each Mews. Here we are merely counting the number of Mews in local authority designated conservation areas, and those which have listed status.

Fewer than 6% of Mews properties are listed, but around 90% are in designated conservation areas.

Mews and tube – Mews development often took place alongside the London Underground resulting in several examples of Mews that are built over tube lines and some that have had tube lines built under them. However, despite the wide spread of the underground system, the number of Mews directly affected by tube lines is now mercifully few; in total only around seventy are affected. Of these the Circle Line affects the most, at 12 Mews, but the Central line, surprisingly, affects only 1 Mews.

In addition to informing our readers about numbers and Mews statistics we hope the information we provide works for the greater good of Mews so that, in some way, everyone can learn to appreciate these distinctive properties as much as we do.

As always, we welcome feedback, so please contact us if you wish to challenge or otherwise enhance our study. It will be much appreciated. 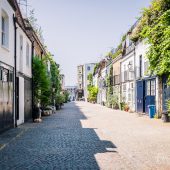