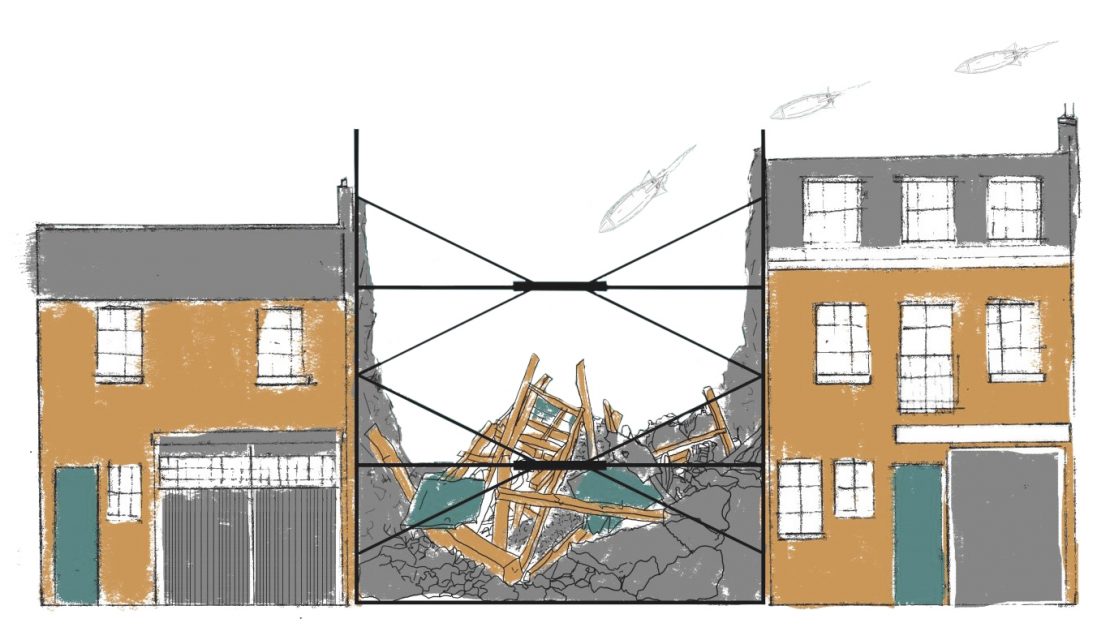 MEWS IN THE WARS

This article is going to answer your curiosity about why some London Mews may have remained intact while others have been rebuilt, or why some Mews have 1950’s and 1960’s additions to the Mews.

Stanhope Mews East: Only the Arch remains (now Grade II listed) – Bombsight.org records that 27 high explosive bombs were dropped between 7th October 1940 to 6th June 1941 in Queen’s Gate. Its subsequent total redevelopment was reproached when described by the Royal Borough as ‘mild mannered… and, fairly convincing’, it went on to refer to it as a ‘garage court’ as well as to state…’ that all interest and variety was designed out on rebuilding’.

The following gives a chronological outline of events affecting the Mews during wartime, not a comprehensive record of events.

Neither the First or Second World Wars were kind to London or its Mews. Due to their central location the Mews (and their environs) were either directly or indirectly targeted by the Germans. Such was the blanket bombing of central areas of London, that the vast majority of Mews suffered either direct hits with around 10 per cent hit directly, or collateral bomb damage.

The bombing of London commenced in WW1. During the Great War London was the main target of the German aerial bombing campaign. The Germans carried out raids primarily using airships, then airplanes. The raids resulted in around 2,900 people being killed or injured in London over the period of four years from December 1914 until August 1918.

Horrific as this was, it proved little more than a warning by comparison with the near 30,000 London atrocities during WWII and in particular the blitz. The Blitz caused serious damage to the City of London and destroyed the docks in the East End. Surprisingly, the West End of London remained relatively intact.

London had lived with the threat of bombing since the outbreak of the war, but this only became reality once France fell to Germany in June 1940, enabling the Luftwaffe to use French and Belgian airfields to bring their attacks into range.

For a period of nine months, the Luftwaffe kept up the Blitz attack ending May 1941. Attacks on London were merciless and incessant. During one 57 day period from September 1940, some 200 planes were launched every night and the last major attack on 19th May 1941 involved more than 500 planes. It is estimated that around 18,800 tons of high explosives were used in the Blitz night attacks and over the whole duration of the war, the attacks damaged around 3.5 million buildings.

Following the Blitz, as Germany looked east towards the Russian front, the attacks on London became more sporadic and there was some relief from the intensive bombing lasting until December 1943. However, still the bombs continued to be a constant threat while fighter planes ran ‘tip and run raids’.

The Baby Blitz occurred between January and May 1944, as a series of attacks were mounted on London in response to British attacks on German towns. German bomber crews were guided by flares dropped by pathfinder aircraft. This tactic caused considerable damage to London’s landscape and brought significant results for the Germans.

As British seaports became the German focus, the V-1 flying bombs arrived. These were pilotless and due to their rumbling noise became known as ‘doodle bugs’. Not known for their accuracy and prone to mechanical failure, their 850kg warhead packed a significant punch. More than 73 hit Greater London on one June day in I944.

The British bombers targeted V-1 launch sites eventually shutting them down in September 1944. The same month V-2 rockets hit London. Considerably bigger with more range, speed and accuracy the V-2 was termed the world’s first ballistic missile and carried a 1000kg warhead. They travelled without the noise of the V-1 and whilst the number of incidents was fortunately small due to the war nearing its end, their lack of warning caused high casualties. 10,000 V-1 flying bombs were launched at London and just under 1400 V-2 rockets.

Mews in Blitz (and pieces)

London City Councils’ Surveyors Records meticulously recorded the extensive damage to personnel and buildings, known as the ‘ruin recorder’ service and held today in the Metropolitan archives. Contemporaneous plans were made of each and every bomb, incendiary and rocket and machine gun attack which has produced a series of coloured plans to record the following:

The records for Stanhope Mews East are replicated below and show a direct hit causing total destruction to the centre of the Mews and serious damage elsewhere. The Mews was rebuilt as a result, although not entirely pleasing the planners.

The Mews also had another important part to play in the wars when a number of Mews were appropriated in the fight against the German allied forces. Their location and adaptability allowed them to be used for ambulance or fire stations, also as general storage of armaments and other essentials needed for the war effort.

Today the majority of Mews have been repaired and rebuilt. These reparations have since largely weathered in to become an accepted part of the Mews streetscape. Yet another example of the Mews’ adaptability and its everchanging nature. 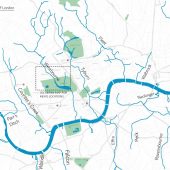 A Mews – A River runs through it 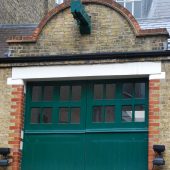